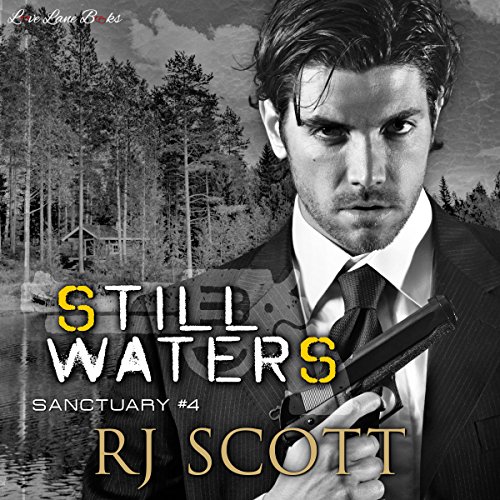 Book four in the Sanctuary series

Adam has a new assignment for Sanctuary. It means working with the man who did not trust him two years ago and destroyed their relationship. He still hates Lee, but Jake Callahan, boss of Sanctuary, does not give him a choice, insisting they need to get along for the good of the cross agency case.

Lee wants desperately to understand why Adam betrayed the Bureau. He is still angry and disappointed, but the memory will not leave him alone. The Bullen case is the perfect cover to get back in his ex-lover's life, and he is determined to find out the truth.

Against the backdrop of Sanctuary and the Bullen case, can they learn to understand and believe that not everything they thought was true was real?

I am sooooo hooked to that series that I am unashamed to admit I had been thrilled when, after a 2 year pause, the Audio Book of Sanctuary Book 04 had finally been released this sumer!!!
RJ Scott has truely a special way with weaving worlds with words,creating vivid surroundings and not to forget very hot and likable characters. And Sean Crisden continues the narrating part! Hurray!!!

After having Morgan and Beckett safe from the Bullens,the pressure on Sanctuary increases from the FBI. Adam, ex-FBI, and his former partner/ex-lover Lee are forced to work together finding the internal leak at the bureau and poke around to move the case on. The liaison FBI Sean has been shadowing Sancturary's boss Jake almost since the start of this case, and doesn't make the situation any easier.

Eventually Adam,Lee and we readers realize how long the FBI mole has already been pulling the strings in the background for the Bullens. Lee is still searching for the „why“ that had Adam kicked out of the Bureau and destroyed their relationship. Now his former lover is a snappy,agressive and dispassionate man it seems.
In the confined safehouse space both men finally do what they should have done 2 years earlier, they talk openly and honestly. They realize how badly they have been manipulated.

It is heart tugging to follow their struggle to get a grip on their deep hurt, lost time together and still trying to pull through with the job. No question, Adam and Lee getting back together is as dramatical as their breakup had been. When they set a trap to expose the mole, Lee gets shot at.

The audio books clearly have become my favourite Sancturay version and are simply flying by every time I listen to the episodes again and again. Now I am impatiently waiting for the Sanctuary 05 Audio Book release.