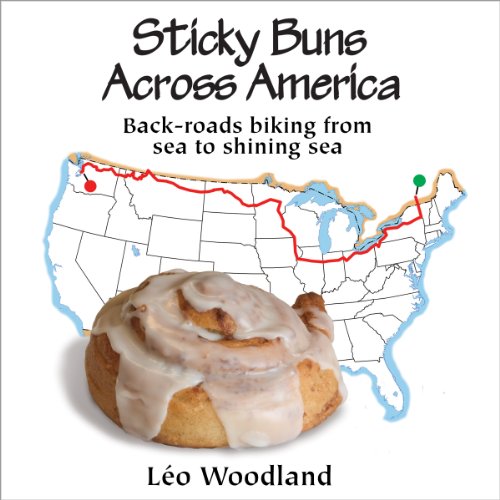 Sticky Buns Across America is the story of one of the four continents and one of the countries Woodland has crossed by bike, this time with patient wife Steph: a tale of riding across small-town America (and occasional bits of Canada, although to Americans that doesn't count).

It's not a tale of heroic battling with storms, riots, poison ivy, Americans, and other problems. Instead, sit back and enjoy an eccentric account of encounters made and experiences lived. Plus, it has to be admitted, a lot of sticky buns eaten.

About the author: Leo Woodland is a tall and balding man who has long annoyed many by not sitting still. Or, indeed, pleased even more by not staying in one place for too long.

So far the tally by bike is 28 countries on four continents.

Mr. Woodland has been writing about cycling since 1965, when he wrote his first reports for the British publication Cycling. Since then he has been a prolific contributor to newspapers, magazines, and radio stations in the U.K, the U.S., and Belgium. Many of his fans know him better as Les Woodland. Sticky Buns Across America is Mr. Woodland's 26th book.