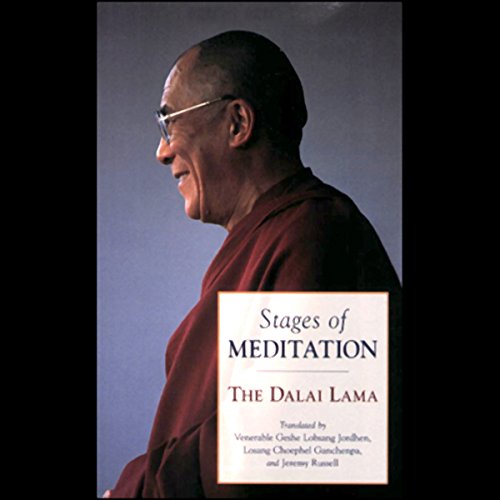 Stages of Meditation is a commentary by the Dalai Lama on a rare text by ninth-century Indian Buddhist scholar Kamalashila. It is a favorite of the Dalai Lama's and he often teaches from this text because "on the basis of this knowledge you will be able to understand other treatises without great difficulty. This text can be like a key that opens the door to all other major Buddhist scriptures."

Throughout the program, the Dalai Lama emphasizes the importance of the logical analysis of scriptures, even those in the Buddha's own words. Some teachings, he stresses, "should not be taken literally, but need interpretation." And interpretation is what the Dalai Lama presents in this clear and enjoyable commentary. Included are such familiar Buddhist themes as training the mind, compassion, the nature of suffering, and the practice of calm abiding. Those who practice meditation, whether Buddhist or not, will find this a thoughtful and practical guide, written with the Dalai Lama's characteristic warmth and gentleness.

"Those who practice meditation, whether Buddhist or not, will find this a thoughtful and practical guide." ( Amazon.com)