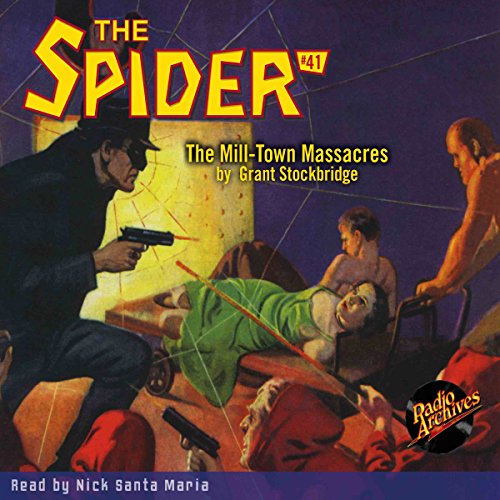 Without any forewarning, the madness struck. One moment the busy steel-mill town of Keystone was a peaceful industrial community. The next, it had become a shambles of murder, madness, and ruthless midnight slaughter. Horror walked its streets, and terror lurked in every close-locked home. Could the Spider, hastening to answer the distressed call of the dismayed inhabitants, prevail against the death which struck from darkness? A stranger in a place of madness, unsupported by friends or allies, Richard Wentworth faces his greatest test - alone!

After three years of writing the frantically paced tales of the Spider, Norvell W. Page suddenly dropped out. No one is sure why this was, but nervous strain due to overwork, along with making unforgiving monthly deadlines, are the likeliest explanations for his abandoning the Spider series. For several months, Emile C. Tepperman ghosted the series as Grant Stockbridge.

Other writers stepped in to take up the slack. But Norvell W. Page refused to remain out of action for long. Like the Spider, his inborn sense of duty compelled him to return, where lesser writers who were his contemporaries, were falling by the wayside trying to keep up with the deadline demands of the Spider's pulpy competition.

"There was a time when the burden of writing yet one more Spider seemed too much to undertake," Norvell W. Page subsequently wrote. "But I never feel that way anymore. I know now that the Spider actually does help people; that there are those who appreciate his idealism, even though it is expressed in violence."

Nick Santa Maria breathes life into the Spider, in The Mill-Town Massacres, Originally published in The Spider magazine, February, 1937.