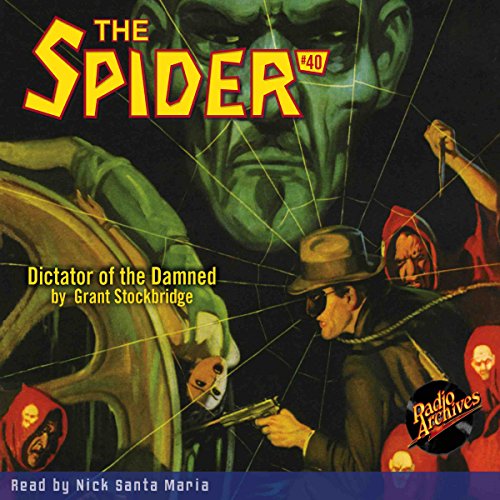 With appalling suddenness, a new hooded monster of crime unleashed swift murder and soul-chilling madness upon Manhattan. His army of assassins struck with wanton savagery to lash terrified millions into a paralysis of fear. The Dictator held sway! And Richard Wentworth, the avenging Spider, driven to the ambuscades of the underworld, faced the vortex of sudden peril alone.

According to author Norvell W. Page, Richard Wentworth was a nemesis of the night, a swift and secret avenger who meted out lethal justice to those of the underworld who dared to raise their hand against humanity; he was the man known throughout half the civilized world as the Spider, and tonight he wore the disguise that would instantly identify him as that dread killer. A long, black cape covered twisted shoulders. A broad-brimmed hat tightly pulled down over a lank wig shadowed a beak-nosed face. The eyes that glittered there were steely with bitter hatred.

As for Wentworth himself, he believed in his mission implicitly:

He was, he told himself, no longer a human being, but a cause. He was the Spider! He must live to defend humanity....

With a "cold cosmic anger" in his eyes, his "eerie weapons of mercy" blasting away unerringly, the Spider seemed superhuman, shrugging off crippling bullet wounds and performing other feats of preternatural endurance that would have demolished an ordinary mortal. No wonder Norvell W. Page called him a "man of steel" four years before Superman.

Once more, the incomparable Nick Santa Maria reads another thrilling Spider exploit. "Dictator of the Damned" originally published in The Spider magazine, January 1937.