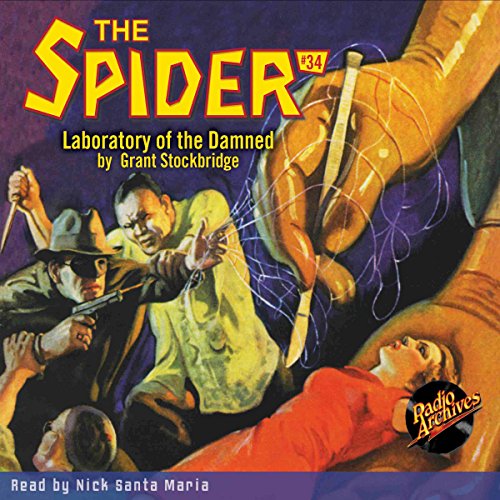 Richard Wentworth - whose grim, anti-crime crusades as the Spider have made him world-famous - was the first objective in the Poison Master's murder campaign. His best friend, Kirkpatrick, lay in a death-like stupor. His beloved, Nita van Sloan, was stricken with the horrible living death! And at the same time, countless thousands were felled by the same fatal venom. Caught in the crossfire between the Law and the Underworld, the Spider must battle the blind apathy of a nation ensnared in a subtle death-trap - must overcome the despair in his own brave heart!

One of the things that sets the Spider apart from other hero characters is magnitude; the villains commit acts of destruction on a grand scale, sinking whole ocean liners, toppling entire buildings, wiping out entire towns with germ warfare. The evil masterminds are in truth more terrorists than criminals, their villainy often more for its own sake than any concrete plan for profit.

The Spider did not speak lightly of evil. He was too gentle, too tender a lover, to blot the glamorous night with useless vaporings. He was too courageous to take fright from vague notions. But through years of ceaseless struggle and hourly danger - from the Underworld and also from the police who considered his brand-marked executions of criminals only murder - he had developed an uncanny feeling like the sixth sense of bats. Flying in the dark, scarcely seeing, an impact of air waves warning the animal of obstacles in its way. So something warned the Spider of danger.

Nick Santa Maria reads Laboratory of the Damned with the crackling intensity you have come to expect of his superb talent. Originally published in The Spider magazine, July, 1936.