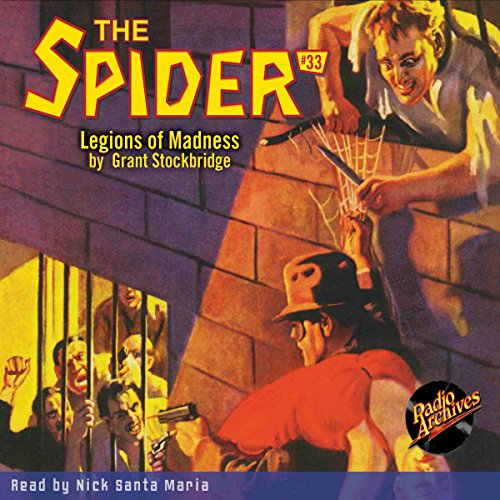 Never had Richard Wentworth - he who is the scourge of the Underworld in his guise of the Spider - faced such tremendous odds or been so alone in the strife! Nita, his beloved, had tried to kill him, as she was hopelessly insane. His faithful servant had been tortured beyond human endurance. And the Master of Madness, chief of a powerful, fiendish syndicate, was spreading his germs of mania unchecked. Who could rescue America from screaming, murderous frenzy when the Spider himself half-doubted his own skill and bravery?

With a "cold cosmic anger" in his eyes, his "eerie weapons of mercy" blasting away unerringly, the Spider seemed superhuman, shrugging off crippling bullet wounds and performing other feats of preternatural endurance that would have demolished an ordinary mortal.

Yet there was a human side to this complex man. Consider his strange relationship with his semi-fiancée, Nita van Sloan.

When he met Nita, his life was already pledged to the service of humanity. The Spider had been a scourge of the Underworld for three full years. So he had fought against the love he knew could never reached culmination in marriage. He had told her that, long ago, when they found their love was stronger than the will to resist; had told her all his secret life in the hope that it might accomplish what his will had not. It had only drawn Nita closer to him, and they had fought the hard way together. As Wentworth once remarked to her, "How perfectly is thy mystic karma attuned to mine!"