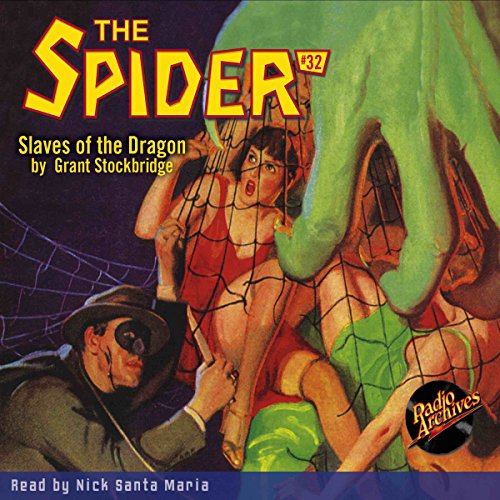 White slavery, the loathsome traffic in women's bodies - and souls - was stripping America of wives, sisters and sweethearts. Richard Wentworth, valiant champion of human rights, knew that an Oriental master criminal was captaining the slavery syndicate, guessed the unspeakable purpose behind those wholesale abductions. But with Nita hopelessly lost, with G-men harrying him relentlessly, can the Spider outwit his most formidable foeman and save America's doomed womanhood?

The Spider was the star of his own pulp magazine for a wild decade bound by 1933 and 1943. Seeing rival pulp house Street & Smith breaking sales records with The Shadow Magazine, Popular Publications president Harry Steeger decided to clone him. Legend has it that he was playing tennis and spotted a spider walking across the court. That gave him a catchy yet creepy title. He hired mystery novelist and occultist R. T. M. Scott to write The Spider Strikes! and a sequel, The Wheel of Death. Mysteriously, Scott bowed out around the time of the first issue, dated October, 1933.

Enter Norvell W. Page, a newspaperman and practitioner of the Edgar Allen Poe tradition in pulps such as Dime Mystery Magazine. Writing under the pseudonym of Grant Stockbridge, Norvell W. Page remade the Spider into his own psychic twin, often dressing up as the Master of Men when delivering his monthly manuscripts. In a letter to a Spider fan, Page wrote, "Think of me as Wentworth, if you will. The line between us is not too distinct."

Nick Santa Maria breathes life into the Spider in Slaves of the Dragon. Originally published in The Spider magazine, May, 1936.