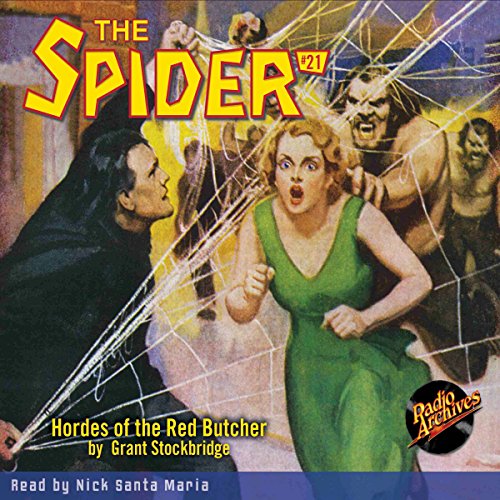 In the gaunt desolation of those dark Kentucky hills, the Dixie Limited, crack flyer, stood gutted of all living passengers.... The Spider, the only survivor, stood alone at that bleak scene, vowing silently, solemnly, to destroy the ambition-mad arch-criminal who had plotted this wholesale ruin. For this, and manifold like disasters, were occurring everywhere in the land - at the direction, Richard Wentworth knew, of some diabolical brain, which was unleashing hordes of primitive barbarians to lay waste to civilization. But later, at the very moment when the Spider should have struck his most telling blow, he was pacing a narrow cell in the death-house at Sing Sing!

Yet there was a human side to this complex man. Consider his strange relationship with his semi-fiancée, Nita van Sloan. When he had met Nita, his life was already pledged to the service of humanity. The Spider had been a scourge of the Underworld for three full years. So he had fought against the love he knew could never reach culmination in marriage. What man could marry, have a home and children, when death and disgrace hung hourly over his head? No, he could not permit Nita to face such a possibility. He had told her that, long ago, when they found their love was stronger than the will to resist; had told her all his secret life in the hope that it might accomplish what his will had not. It had only drew Nita closer to him, and they had fought the hard way together. As Wentworth once remarked to her, "How perfectly is thy mystic karma attuned to mine!"

Nick Santa Maria reads Hordes of the Red Butcher with the crackling intensity you have come to expect of his superb talent. Originally published in The Spider magazine, June 1935.