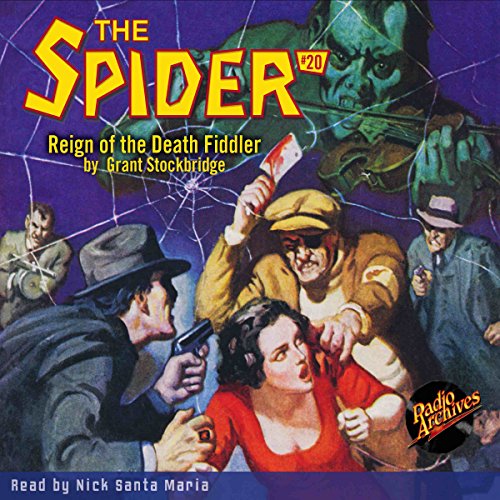 Exactly at 11:30 each Thursday night, the Death Fiddler conducted his unholy orchestra in a symphony of murder that sounded the doom of some marked victim. A master of the grotesque, he held an entire city in the stranglehold of a helpless terror; even the forces of the law stood in shuddery, superstitious fear of this new destroyer. And then the Spider, Master of Men, modern knight-errant of mankind, rose up against him! But the Spider, too, was baffled; not all Richard Wentworth's efforts seemed enough to destroy this new, this ugliest of all Hydra heads rearing out of the noxious slime of the Underworld....

For 10 grim years, the Spider battled the Underworld, imprinting his scarlet seal on the bodies of the criminals he slew. No one knew his name. His face was unknown. Pursued by the police, sought by the mob, the Spider crushed crime with a blazing intensity never witnessed before or since. Driven, hunted, and violently committed to exterminating criminals of all calibers. A self-appointed savior of humanity, driven manic depressive, and possibly undiagnosed paranoid schizophrenic, the Spider was known as the Master of Men.

The most compelling of the classic pulp heroes, Richard Wentworth had a fiancé, a coterie of equally committed aides, and a tense relationship with New York Police Commissioner Stanley Kirkpatrick, Wentworth's best friend but also a dedicated lawman sworn to send the Spider to the electric chair - no matter who he turned out to be.

Garbed in a black silk cloak and slouch hat and wearing an assortment of masks and strange disguises to make him look as fierce as his namesake, the Spider ran roughshod over a vicious legion of thugs and hoodlums, leaving behind him a trail of cold corpses branded by his calling card: a scarlet spider burned into their foreheads.

Nick Santa Maria reads "Reign of the Death Fiddler" with indescribable emotion. Originally published in The Spider magazine, May 1935.