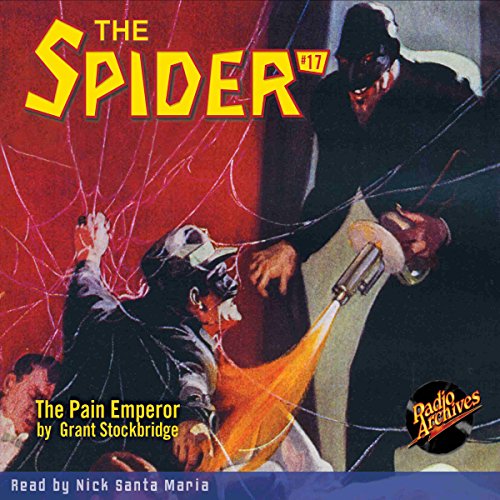 In 100,000 homes, families sat down together at the supper table. A few hours later, those persons were dead - killed by poison in canned foods! Thousands of women used cosmetics, and acid made their faces forever hideously scarred. A master criminal, daring and clever, was ruthlessly slaughtering Americans to win immense illicit profits for himself. Only one man was powerful enough and wise enough to stop this wholesale murder - Richard Wentworth, champion of oppressed humanity, better known as the Spider. And the Spider was engaged in the bitterest battle of his career, fighting the Avenger, a false, wily crusader who was determined to destroy him!

Norvell W. Page, writing under the pseudonym of Grant Stockbridge, remade the Spider into his own psychic twin, often dressing up as the master of men when delivering his monthly manuscripts.

In a letter to a Spider fan, Page wrote, "Think of me as Wentworth, if you will. The line between us is not too distinct."

Page took Spider readers on a roller-coaster ride of wild action and fevered emotion unlike anything ever published before or since. Once he got going, Page painted a portrait of a tortured superhero, one much more emblematic of the 21st century than of the Great Depression.

Richard Wentworth saw himself as a man on a holy mission, a self-appointed messiah with a martyr complex - a Christ covered in cobwebs. He was the champion of oppressed humanity, its shield and protector against the murderous outbreaks of the underworld; wherever crime struck terribly, he hastened, taking up the challenge. The police had offered rewards totaling thousands of dollars for his capture "dead or alive." And the underworld hated him and plotted his destruction with a fierceness bred of abject terror.

Nick Santa Maria breathes life into the Spider in "The Pain Emperor". Originally published in The Spider magazine, February 1935.