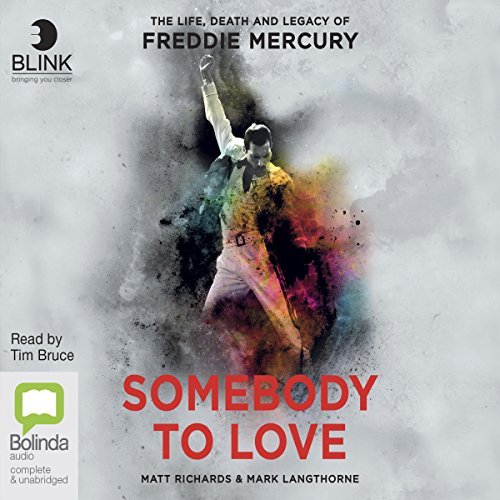 For the first time, the final years of one of the world's most captivating rock showmen are laid bare.

When Freddie Mercury died in 1991, aged just 45, the world was rocked by the vibrant and flamboyant star's tragic secret that he had been battling AIDS. That Mercury had even been diagnosed came as a shock to his millions of fans, with his announcement coming less than 24 hours before his death.

In Somebody to Love, biographers Mark Langthorne and Matt Richards skilfully weave Freddie Mercury's incredible pursuit of musical greatness with Queen, his upbringing and his endless search for love with the story of a terrible disease that swept across the world in the 1980s, as medical treatment fought to catch up with it despite underfunding, social ignorance and homophobia.

With brand-new perspectives from Mercury's closest friends and fellow musicians, this unique and deeply moving tribute casts a very different light on both his death and the origins of AIDS itself.

An intimate listen, like Freddie and his art, it will stay with you for a long time.

Not only does this biography give a phenomenal insight into the life of Freddy Mercury with a great narrator voice, but it also explains how HIV spread around the globe and how the gay society was treated at these times. Absolutely a must have!