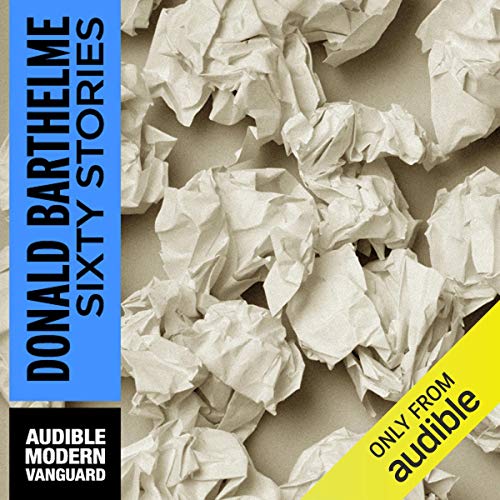 Donald Barthelme's Sixty Stories is a collection of some of his greatest work from the 1960s and 1970s. Each of these pieces is raucous, absurd, incisive, and beautiful; each represents not only a story, but the re-imagination of the story as a form. And in each, as writer David Gates points out in the introduction, Barthelme manages to "restore freshness to a much handled language"

It's difficult to know when to take Barthelme's characters seriously, and narrator Dennis Holland appears to delight in this ambiguity as he portrays a staggering slew of characters with an equally wide array of accents and tones. Holland's versatility as a narrator is particularly apparent in dialogue-rich stories like "Daumier", where he shifts flawlessly between characters as unalike as Celeste and Mr. Hawkins — a young French au-pair and an old Western cowboy who are, themselves, a figment of the narrator-writer's imagination. However playfully Mr. Holland portrays his characters, and despite their sometimes tenuous existence even as entities of fiction, his narration manages to always treat them with humanity and respect.

If Barthelme's humor is at times obscured by the bizarreness of his narratives, Mr. Holland's excellent sense of timing casts it wittily into relief. In Holland's hands, stories like "The Death of Edward Lear", in which an aging, self-described "nonsense writer and landscape painter" invites acquaintances to his bedside to witness the moment of his death, are likely to elicit outright laughter where silent reading might have brought on a slow smile.

In other places, such as "The Balloon", Holland's narration is subtle, allowing Barthelme's brilliant, stunning language to create for the listener a world both alien and familiar. Throughout the whole range of these stories, Holland's narration is cheerful, even amused — a characteristic that underlies the sometimes biting incisiveness of Barthelme's characters and scenes.

Though Barthelme's loose narrative structure can sometimes be challenging to follow without the help of the physical page (it would be ideal to read along as you listen), this collection feels truly brought to life by Dennis Holland's gifted narration. Sixty Stories is a delightful, vibrant listen. —Emily Elert

With these audacious and murderously witty stories, Donald Barthelme threw the preoccupations of our time into the literary equivalent of a Cuisinart and served up a gorgeous salad of American culture, high and low. Here are the urban upheavals reimagined as frontier myth; travelogues through countries that might have been created by Kafka; cryptic dialogues that bore down to the bedrock of our longings, dreams, and angsts.

Like all of Barthelme's work, the 60 stories collected in this volume are triumphs of language and perception, at once unsettling and irresistible.

"Donald Barthelme may have influenced the short story in his time as much as Hemingway and O'Hara did in theirs. Sixty Stories is a whole earth catalog of life in our time." (The New York Times)
"Barthelme can focus our feeling into a bright point that can raise a blister. These 60 stories show him inventing at full pitch." (The Washington Post)