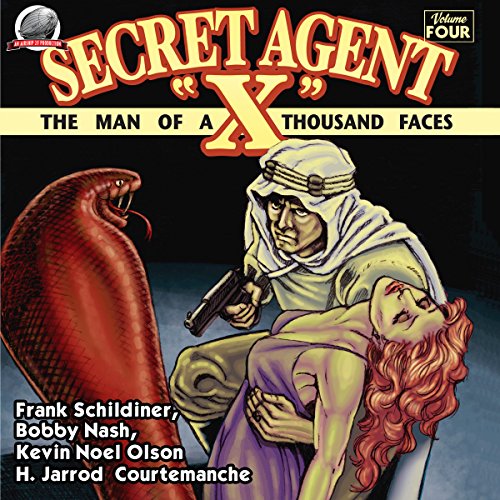 The greatest pulp spy of them all, Secret Agent X, returns in four brand new adventures. Continuing the excitement and thrills generated by the previous three volumes in this series, the Man of a Thousand Faces is back in four daring adventures written by today's most talented pulp writers. Deep in mountains of central Europe, Bobby Nash pits X against a deadly beast-man with a special agenda while Jarrod Courtemanche has the master spy confronting a scientist who controls fears. In a one-of-a-kind crossover, Agent X confronts one of the most nefarious pulp villains of them all, Fantômas, courtesy of Kevin Noel Olson, and finally, Frank Schildiner chronicles one of our hero's earliest missions alongside the famed Sir Lawrence of Arabia in the burning sands of the Sahara.

Dedicated to the protection of his country, the master of disguises, America's top secret agent is unwavering his loyalty and courage as he once against takes on villainy in all its myriad forms. He is the one and only Secret Agent X! Airship 27 Productions - pulp fiction for a new generation!