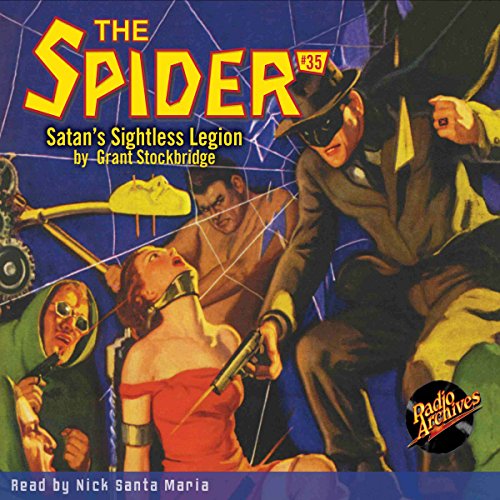 It is Wentworth himself - the Spider - who is first to feel the dread hand of that Master of Darkness - The Blind Man - and his satanic weapon. His best friend, Kirkpatrick, Commissioner of Police, is strangely attacked by the forces of evil; his beloved Nita van Sloan is spirited away into a fearsome fate...and the Spider himself is destined to a horrible life of pain and misery. Caught between the forces of evil, the Spider at last seems doomed to die in ignominy!

In the summer of 1933 Popular Publications President Harry Steeger and Executive Editor Rogers Terrill decided to enter the new field of magazines built around a single hero. They wanted to publish a crime-buster to rival a famous pulp juggernaut. Steeger frankly admitted in later years, "The reason we started the title The Spider was because of the success of Street & Smith's The Shadow. At this point in pulp history individual titles became very popular, so we decided to try out a few ourselves."

Author Norvell W. Page, who penned the majority of the Spider's exploits as Grant Stockbridge, once described his hero in gigantic, but unflinching, terms: "His exploits had raised him to the proportions of a legendary hero. In ancient times, Rome would have made him an emperor god. Salem might have burned him as a sorcerer."

Nick Santa Maria again takes on the dual role of Richard Wentworth, aka the Spider, master of men, for this powerful story, originally published in The Spider magazine in August, 1936.