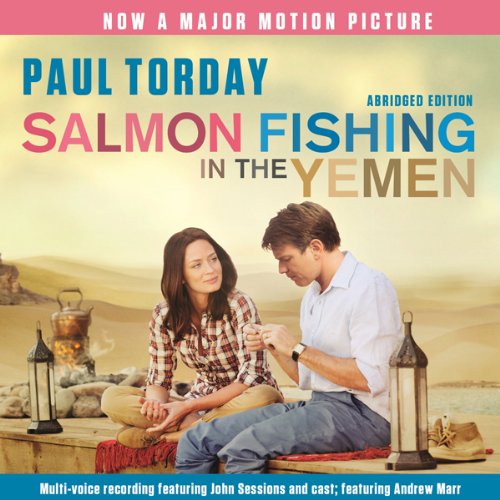 Salmon Fishing in the Yemen

Written as a "report into the circumstances surrounding the decision to introduce salmon into the Yemen", this is a novel that is made up of e-mails, letters, diary extracts, records of the prime minister's Question Time, interviews, and chapters from the memoirs of a fantastically weasely Peter Mandelson-type figure.

The "Yes Minister" comparisons are justified (and there is some brilliant, hilarious political and bureaucratic satire here), but at its heart, this is the story of a hen-pecked, slightly pompous, middle-aged scientist who finds himself caught up in what seems like an impossible project, and of how this project changes his life. In the process, he becomes an unlikely and rather loveable hero, discovers true love for himself, finds himself both a pawn and then a victim of political spin, leaves his brilliantly horrible wife, and learns to believe in the impossible. And he takes the listener with him in the process.

"An entertaining and successful debut... it is warmly recommended to anyone searching for feel good comedy with surprising bite." (The Sunday Times)
"The intelligence, inventiveness and humanity of this novel in comparison to the usual run of literary fiction is as wild salmon to the farmed."(Daily Telegraph)
"[It] succeeds in an ambitious project: making a book about fishing readable, even touching. Fish may not be your bag, but it is the capacity for commitment and belief that makes for good reading."(New Statesman)
"Entertaining storytelling with great characters and laugh-out-loud plot."(Woman and Home)
"A wickedly comic first novel about the power of money and the miracle of faith."(Saga)
"A lovely musing on how risking it all - however much it may be perceived as foolish or ridiculous, can bring hope and faith and love to the most bleak of outlooks..." (Scotland on Sunday)
"(Salmon Fishing in the Yemen) Invovles a visionary sheikh who believes that he can bring his people closer to God through the spirtual peace to be derived from salmon fishing; its hero is a fisheries expert who finds love and new faith in the course of this all but impossible enterprise." (The Times)