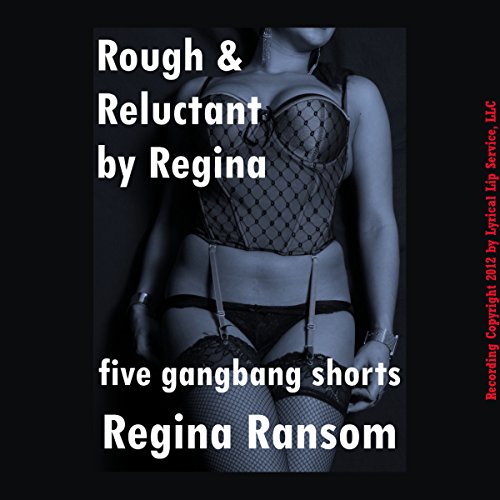 Regina Ransom may be the queen of erotica writers when it comes to rough and reluctant gang bangs. In this collection of five of her scorching stories, ill-fated heroines are pushed to their sexual limits by groups of sex-hungry men with hard cocks and no concern for the comfort of their living sex dolls. Of course, when Regina writes, the reader soon realizes that a rough gangbang with a reluctant woman opens her mind, spirit, and body to true and real pleasure. So pull up a chair and get right into this collection of more than 23,000 words worth of gang bangs.

"No Choice at All": An event planner never realizes until she's pushed to her knees that's she's the entertainment for the convention she's organized.

"Keep the Line Moving": A girl with a crush finally gets her boy undressed. Of course, the boy wants to make sure all of his friends are entertained.

"Song and Dance! The Showgirl Gets Gang Banged: A Rough and Reluctant Short"

Regina Ransom's controversial forays into the world of rough and reluctant gang-bang sex has produced yet another extreme hardcore erotica short. In "Song and Dance", Lisa wants to be a star more than anything. When a man she thought would support her suddenly throws a monkey wrench into the works, she thinks her career and her chance at fame might be over. That's just the beginning, and before the end, she'll endure a terrible night of rough and reluctant gang-bang sex complete with humiliation, forced deep-throat, very rough sex, and a painful first anal sex experience in the form of a vicious double penetration. Just how much can a woman take in the hopes of making it on Broadway?

"Seven the Hard Way": A woman is tired of being overlooked for promotion and confronts her boss, who allows her to meet with a group of company bigwigs. Only they're not really company bigwigs, and the meeting is all about getting their cocks into the girl.