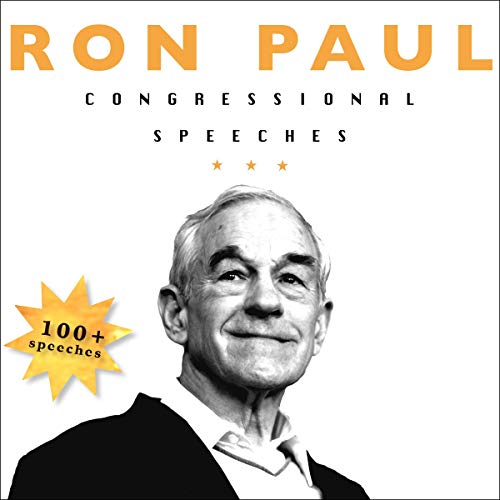 Now you can enjoy more than 100 speeches from the esteemed Congressman Ron Paul, gathered together, organized, and with cleaned-up audio!

Much has been said about Congressman Ron Paul. But in forming an opinion of the man, perhaps it's best to go straight to the source and hear his own words. Here are collected more than 100 key Congressional speeches by Ron Paul, given on the floor of the US House of Representatives.

Spanning over a decade, these 100-plus speeches cover topics such as civil liberties, monetary policy, and the follies of war. Taken together, they paint a portrait of Congressman Paul as a constant fighter for his ideals, as well as a prescient observer of world affairs. He warns about Osama bin Laden three years before the 9/11 attacks, and cautions against deposing Saddam Hussein six years before the Iraq War. He forecasts a housing bubble more than a decade before its burst in 2008 and teams up with Sen. Bernie Sanders (who makes a brief cameo in one of these speeches) against corporate welfare back in 2002.

These speeches, given on the Congressional Floor and recorded by Congressional microphones, are in the public domain. But they have been compiled, organized, and edited, and the audio quality has been cleaned up for your convenience. Speeches are organized by topic, with a table of contents added for ease of browsing, and the date of each speech is given. Additionally, introductory forewords have been written and recorded to help set the historical context for many of the speeches.