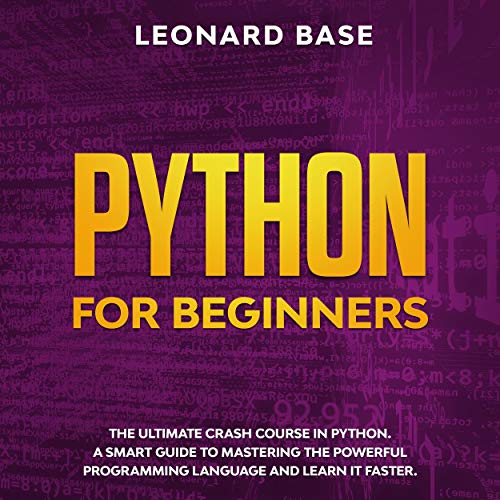 Python for Beginners: The Ultimate Crash Course in Python

Learning a programming language can seem like a daunting task. You may have looked at coding in the past, and felt it was too complicated and confusing. This comprehensive beginners' guide will take you step by step through learning one of the best programming languages out there. In a matter of no time, you will be writing code like a professional.

Python programming has become one of the most common programming languages people use. It brings a live language that can be used in software into the coding world. It has become the most common program used in websites and other digitalized materials. It helps one understand machines and any coded messages in any software that is already being used. There are many more programs, but this has been targeted for this book. For a better understanding of how software programs actually work and how you can start learning slowly with no hurry, purchase this guide.

So what does this book entail? There are basic principles of Python programming. These are the first step, or the introduction, to what is Python programming. There are also basic features of Python programming, which are explained in the introduction part. The other thing is knowing how to install Python. You generally learn how to install Python into the existing operating systems. The operating systems include Linux, Macintosh, and Windows. After knowing how to install Python is knowing how to run it in the system. The next thing is understanding the integrated development environment. What comes next is your first program in Python, and here one has to know their variables. Getting to know what the variables are is the next thing that is discussed. They are divided into two, which are numbers and strings. There are other aspects tied into the variables, which are the identifiers and keywords, and the other set is the comments and the statements. These are big parts of Python. You will also learn about the basic operators in Python. The other thing discussed is the data types that are used in Python. There are two major ones, which are the number and the number conversion. The number is very clear, but the number conversion is divided into two, and that is the decimal and the fraction. Mathematics used in Python is also discussed. There is also the type of conversion that is used and also what kind of typecasting. You will learn input, output, and import usages in Python. Learn how to syntax in this book through Python. Find out the functions used in Python programming, demystified in this book. Also learn about the variable scope that is used in Python. Finally learn about the data process, analysis, and visualization in Python.

Some aspects that can be taken from this book:

• Learn about the operating systems and how they work

• Know about all the Python modules and packages

• Get to know what loops exist in the Python

• Learn what the variables are in the world of programming

• The useful features of Python for beginners - including some ideas you can apply to real-world situations and even other programs.

Even if you have never used computer programs before, this guide will help you to understand step by step how to learn Python programming quickly.