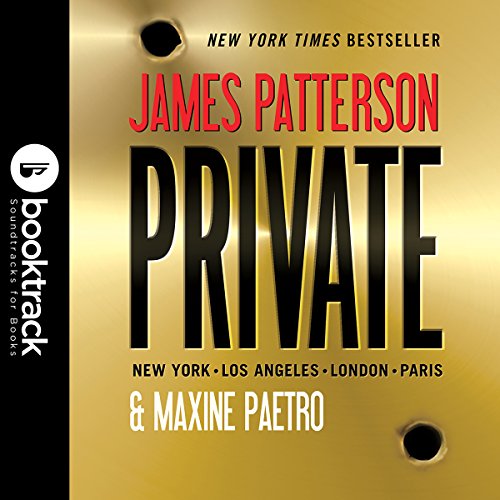 Booktrack editions are essentially a new genre of digital storytelling entertainment. Music and ambient audio are added to complement and enhance the audiobook experience. It is a synchronized movie-style soundtrack that complements the narration of existing audiobooks; the tempo and rhythm of the score harmonize with action, dialogue and the characters' emotional arcs.

The police can't help you

Former Marine helicopter pilot Jack Morgan runs Private, a renowned investigation company with branches around the globe. It is where you go when you need maximum force and maximum discretion. The secrets of the most influential men and women on the planet come to Jack daily - and his staff of investigators uses the world's most advanced forensic tools to make and break their cases.

The press will destroy you

Jack is already deep into the investigation of a multi-million dollar NFL gambling scandal and the unsolved slayings of 18 schoolgirls when he learns of a horrific murder close to home: his best friend's wife, Jack's former lover, has been killed. It nearly pushes him over the edge. Instead, Jack pushes back and devotes all of Private's resources to tracking down her killer.

Only one place to turn: Private

But Jack doesn't have to play by the rules. As he closes in on the killer and chooses between revenge and justice, he has to navigate a workplace love affair that threatens to blow the roof off his plans. With a plot that moves at death-defying speeds, Private is James Patterson's sleekest, most exciting thriller ever.

*Booktrack is an immersive format that pairs traditional audiobook narration to complementary music. The tempo and rhythm of the score are in perfect harmony with the action and characters throughout the audiobook. Gently playing in the background, the music never overpowers or distracts from the narration, so listeners can enjoy every minute. When you purchase this Booktrack edition, you receive the exact narration as the traditional audiobook available, with the addition of music throughout.