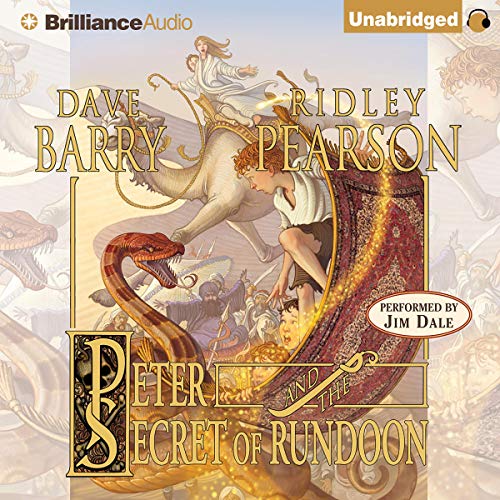 Peter and the Secret of Rundoon

Peter and the Secret of Rundoon

In this action-packed conclusion to the Starcatchers trilogy, Peter and Molly find themselves in the dangerous land of Rundoon, ruled by the evil King Zarboff, who takes great delight in watching his pet snake, Kundalini, consume anyone who displeases him. But that's just the start of the trouble facing our heroes, who once again find themselves pitted against the evil shadow creature, Lord Ombra, in a struggle to save themselves and Molly's father - not to mention the entire planet - from an unthinkable end.

Meanwhile, back in Never Land, a tribal war is under way, and while Peter is off fighting to save the world, a young Mollusk princess has no choice but to join forces with sinister pirates to save her island from the vicious Scorpions.

Peter and the Secret of Rundoon is a wild desert adventure - with flying camels, magic carpets, and evil shadows - that literally zooms toward an unforgettable and unimaginable climax. Dave Barry and Ridley Pearson have teamed together once again to pen a story with unrelenting action and adventure that can be enjoyed by listeners of all ages.

"Dale has the uncanny knack of knowing his characters; he presents each personality to us as an intimate acquaintance." ( AudioFile)
Listen to the rest of the Starcatchers trilogy.
©2007 Dave Barry and Ridley Pearson (P)2007 Brilliance Audio