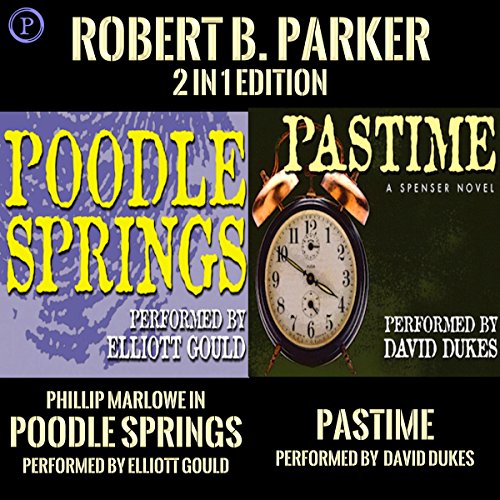 This "2-in-1" Robert B. Parker Edition includes:

Pastime
Spenser crossed paths with Paul Giacomin a decade ago. Now Paul's mother has vanished, and he enlists Spenser's aid to find her. Following her trail to its astonishing conclusion, Spenser is led back through Paul's own rites of passage - along the lanes of his own memories. The boy Spenser was and the man Paul must race toward a confrontation that may break their hearts, and threaten their lives.

Poodle Springs
Philip Marlowe is back and he's married to a rich, beautiful society lady who wants him to settle down in the posh, desert community of Poodle Springs. Marlowe may have married rich, but he's still up to the same business. Hired to recover a gambling debt, he soon finds that bigamy, pornography, murder - and a bride who prefers that he spend his days lounging around the pool - make it a tough case.