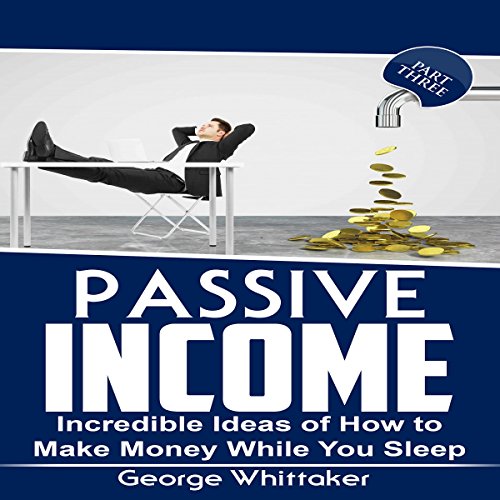 Passive Income: Incredible Ideas of How to Make Money While You Sleep, Book 3

Use these guidelines of making passive income in no time and achieve your well-deserved financial freedom!

The focus of part three is to generate long-term passive income through a combination of hard work and some monetary investment. There are multiple price points to get started, and depending on the skills that you may already possess, some options may prove to be less expensive than originally thought.

This book will discuss how to generate revenue through P2P lending, creating an app(s), and through joint venture partnerships. These are investments that I have participated in myself, and while some money down is required, there are pricing options available, so you can get started even if you don't have that much to invest. As we move into these later investments, you will notice that they mimic more traditional investments but are accomplished on a smaller scale. These are invented so that any American household can participate, and with the trade-off of more monetary investment and less labor, these inventions will overall take less of your time than what was provided in parts one and two of this series.

Passive income is a process that builds on your past efforts, and the following investments will prove to be no different. In each case, you will only be earning small returns at first, but with reinvestment, this will build into a larger revenue stream over time. Mimicking traditional forms of investments, there will be an inherent mental roadblock to getting started - the initial returns will seem too small to be worth your effort. This is a completely normal aspect of human behavior and is, in fact, the reason that so many Americans do not invest to begin with. There is no such thing as easy money, but these are investments that are trading labor for money and time.

By merely sitting back, watching your investment grow, and then reinvesting that money, you will come to find your passive revenue stream can supplement your main income quite significantly. It is just a matter of getting over the hump of starting with investment and parting with your hard-earned money for enough time to watch an investment grow.

In this third part of four-part series you will learn: