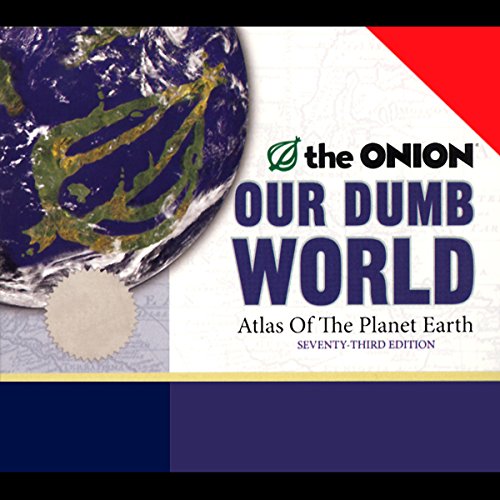 To understand the news, the context of world geography and history is essential. That is why The Onion is publishing an audio world atlas: to help us. News that now makes no sense will now make sense; thus a new age of enlightenment. Our Dumb World contains news and historic facts from other nations, historic timelines for countries, and the earth broken down and described (from its molten core to the outermost sphere and the location of heaven), as well as demographic, economic, and other data about each country's people, industries, and habits.

Every country is categorized in a number of ways, including ethnic cleanliness, level of Bono activity, prop comedians per 1,000 live birds, yearly income in wide-screen televisions, the monkeys they got, where it sees itself in five years, average skin color, benefits of invading said country, and most annoying handicrafts. Framed with informative essays and written by the full Onion staff, Our Dumb World is the first original Onion audiobook in eight years: a gut-busting send-up in which no nation escapes unscathed.