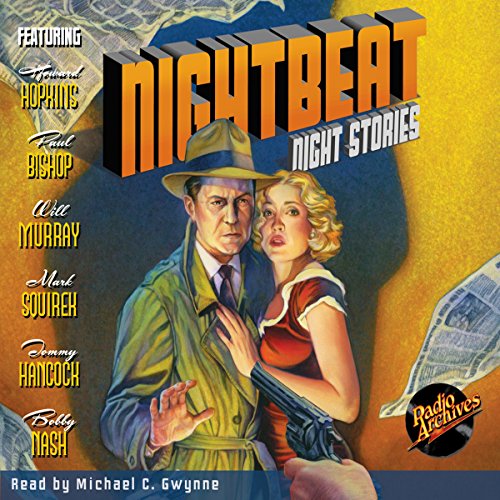 In 1950, NBC began broadcasting Nightbeat, considered one of the finest shows of its time. The show featured Randy Stone, a reporter who covered the night beat for the Chicago Star with a unique blend of wit, compassion, and toughness. From murder to mystery, gunplay to climactic chases, from heartache to hardboiled, every night brought a new story to Randy Stone. Radio Archives invites you to listen to six brand-new Nightbeat stories set on the streets of Randy Stone's Chicago in Nightbeat: Night Stories.

A mystery involving a puzzle. A mad killer strangling women. A young boy on the wrong road. An old flame threatening to burn again. Blood and conspiracy in the boxing ring. The murder of a reporter. And at the center of every tale, Randy Stone. This nostalgic collection of new tales for your listening pleasure comes alive courtesy of noted actor Michael C. Gwynne. Delivering each line with a mix of two fisted determination and humanity, Gwynne makes Randy Stone and his Chicago living, breathing realities for both Nightbeat fans and new listeners.

This collection includes: "Introduction", by Tommy Hancock; "Strangler", by Howard Hopkins; "The Chicago Punch", by Paul Bishop; "Puzzle in Purple", by Will Murray; "Down Addison Road", by Mark Squirek; "Lucky", by Tommy Hancock; and "The One That Got Away", by Bobby Nash.

Michael C. Gwynne's outstanding achievements have encompassed all areas of entertainment - radio, television and film. Throughout the '60s Michael could be heard as a DJ in San Francisco, New York City, and Los Angeles. Shortly after breaking the Guinness Book of World Records record for nonstop drumming - 92 hours at the 1965 "Drum-a-Thon" in Honolulu - Michael was cast in the TV series The Psychiatrist by a young Steven Spielberg.

Michael went on to work behind the scenes on Spielberg's breakthrough film, Jaws, where he can be heard as the DJ on beach radios. He continued to land roles in popular television shows: Kojak, Dallas, CHiPS, Hill Street Blues, Cagney & Lacey, and Falcon Crest before he crossed paths again with Spielberg when he was cast in an episode of Amazing Stories directed by Martin Scorsese.

Although Michael has worked steadily as a character actor in television and film over the last three decades, his first love is still radio where he enjoys the challenges of a fast paced production, bringing a character to life with nothing but his deep thrilling voice!