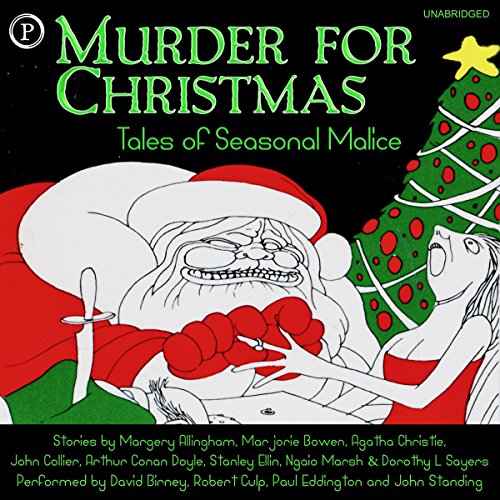 Ah, the pleasures of Christmas...the hanging of greens, the traditional feast, the gathering families, a few secrets in the air...and a bit of murder, conspiracy, and theft. The holiday season seems to inspire the imagination of the best mystery writers, and their talents shine here in these delightful tales of Yuletide crime. So seize a few quiet hours in this busiest of seasons to enjoy their sleigh full of mysterious treasures, here with the finest of flair.

"Death on Christmas" by Stanley Ellin - A lawyer visits his reclusive clients on Christmas Eve.

"The Necklace of Pearls" by Dorothy L. Sayers - Traditional party games in a fine old manor house are interrupted by the disappearance of family treasures.

"The Case is Altered" by Margery Allingham - In the shadows of a country estate aquiver with Christmas bustle, Mr. Albert Campion discerns activity that could be young love...or blackmail.

"Cambric Tea" by Marjorie Bowen - An unpleasant aristocrat swears that his wife is poisoning him, and demands the intervention of a young doctor.

"The Adventure of the Blue Carbuncle" by Sir Arthur Conan Doyle - The game is afoot! And the world's greatest consulting detective, Sherlock Holmes, is on the trail of the diamond thief who's hidden his booty in a Christmas goose.

"The Adventure of the Christmas Pudding" by Agatha Christie - Persuaded against his will to enjoy the pleasures of an old-fashioned English country Christmas, Hercule Poirot is on the trail of a rare and priceless ruby which has disappeared under circumstances embarrassing to its princely owner.

"Death on Air" by Ngaio Marsh - Septimus Tonks has been found dead of electrocution on Christmas morning; Chief Detective, Inspector Roderick Alleyn, must determine whether it's an accident, a suicide...or murder.

"Back for Christmas" by John Collier - Hermione Carpenter manages everything beautifully, and has promised to bring her husband, the doctor, back to England for Christmas, but he has other plans....