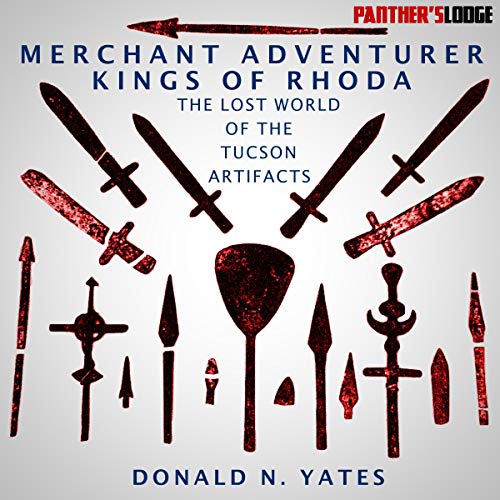 Merchant Adventurer Kings of Rhoda: The Lost World of the Tucson Artifacts

The Tucson Artifacts document the annals of a forgotten Roman-styled military governorship in Chichimec Toltec Northwest Mexico. Perfectly preserved, complete and unaltered, they are straightforwardly composed in Latin, the official language of records during the Middle Ages. They do not have to be reconstructed, pieced together, deciphered, or dated. This illuminating collection of readings translated from Latin, Greek, Arabic, Chinese, Nahuatl, Hebrew, and other languages by medievalist Donald N. Yates provides the cultural contexts for understanding these unique witnesses to world history.

The finds come from the 1920s and consist of lost-wax, cast-lead ceremonial objects inscribed with medieval Latin historical texts and memorials of leaders with names, such as Jacob, Israel, Benjamin, Joseph, Saul, Isaac, and Theodore. Some also contain Hebrew phrases like “eight divisions” and “a great nation”, while others display commemorated leaders’ portraits, ships, trademarks in Tang-era seal script, temples, a Mesoamerican glyph, sacrificial fire, an anchor, Romanesque-style angels in glory and other drawings. A series of thick one-sided double crosses, joined like sealed albums present what are clearly records signed by OL (Oliver), with dates ranging from 560 to 900 AD. The overarching provenance is declared by the makers of the artifacts themselves to be Roman (Romani, monogram R), a term tantamount at this time to European. This claim to nationality is further divided into Levites (L) and Israelites (I). One of the stand-out emblems depicted is a triple tiara, a symbol of Jewish priesthood associated with the Mesoamerican figure of Quetzalcoatl.

Listen to "The Song of Roland" and other chansons de geste, Toltec commercial practices and religion, military training, mining, Celtic Judaism in Brittany and Britain, the original Knights Templar, and other relevant subjects from the history of the Dark Ages.