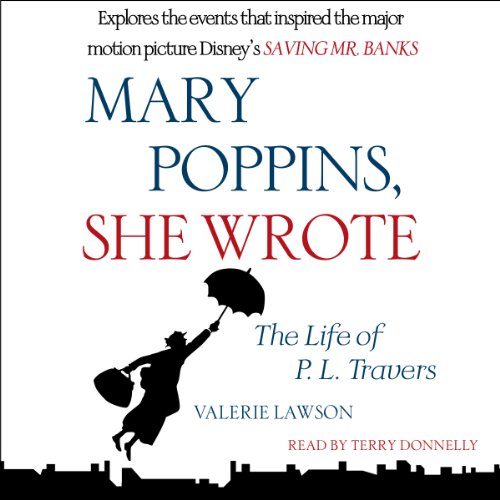 The story of Mary Poppins, the quintessentially English and utterly magical children's nanny, is remarkable enough. She flew into the lives of the unsuspecting Banks family in a children's book that was instantly hailed as a classic, then became a household name when Julie Andrews stepped into the starring role in Walt Disney's hugely successful and equally classic film. Now she is a Broadway sensation all over again.

But the story of Mary Poppins's creator, as this first biography reveals, is just as unexpected and remarkable. The fabulous English nanny was conceived by an Australian, Pamela Lyndon Travers, who in 1924 came to London from Sydney as a journalist. She became involved with theosophy and traveled in the literary circles of W. B. Yeats and T. S. Eliot. Most famously, she clashed with "the great convincer" Walt Disney over the adaptation of the Mary Poppins books into film.

Travers, whom Disney accused of vanity for "thinking you [Travers] know more about Mary Poppins than I do," was as tart and opinionated as Julie Andrews's big-screen Mary Poppins was cheery and porcelain beautiful. "You've got the nose for it," Travers candidly assessed the star. Yet it was a love of mysticism and magic that shaped P. L. Travers's life as well as the character of Mary Poppins. The clipped, strict, and ultimately mysterious nanny was the conception of someone who remained thoroughly inscrutable and enigmatic to the end of her 96 years.

"Who is P. L. Travers?" the American press inquired of "this unknown Englishwoman" whose creation resulting in Hollywood gold had won her international fame. Valerie Lawson's illuminating biography, Mary Poppins, She Wrote, provides the first and only glimpse into the mind of a writer who fervently believed that "Everyday life is the miracle."