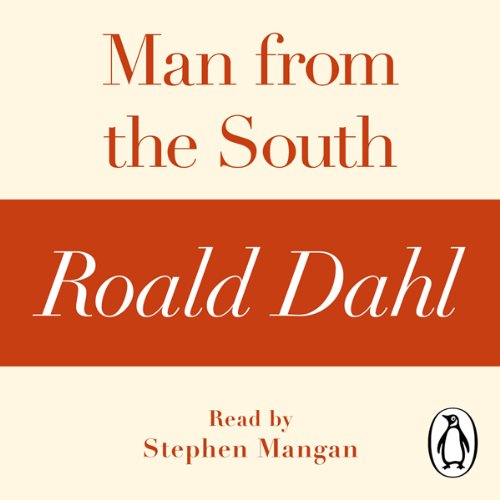 Man from the South (A Roald Dahl Short Story)

The unabridged, digital audiobook edition of "Man from the South", a short, sharp, chilling story from Roald Dahl, the master of the shocking tale, read by the actor Stephen Mangan.

In "Man from the South", Roald Dahl, one of the world’s favourite authors, tells a sinister story about the darker side of human nature. Here, a man takes part in a very unusual bet, one with appalling consequences....

"Man from the South" is taken from the short story collection Someone Like You, which includes seventeen other devious and shocking stories, featuring the wife who serves a dish that baffles the police; a curious machine that reveals the horrifying truth about plants; the man waiting to be bitten by the venomous snake asleep on his stomach; and others. This story is also available as a Penguin ebook.

Roald Dahl, the brilliant and worldwide acclaimed author of Charlie and the Chocolate Factory, James and the Giant Peach, Matilda, and many more classics for children, also wrote scores of short stories for adults. These delightfully disturbing tales have often been filmed and were most recently the inspiration for the West End play, Roald Dahl’s Twisted Tales by Jeremy Dyson. Roald Dahl’s stories continue to make listeners shiver today. Stephen Mangan’s television work includes Episodes, Dirk Gently, Green Wing, and The Comic Strip Presents - The Hunt for Tony Blair. His film work includes Rush, Beyond the Pole, and Confetti.