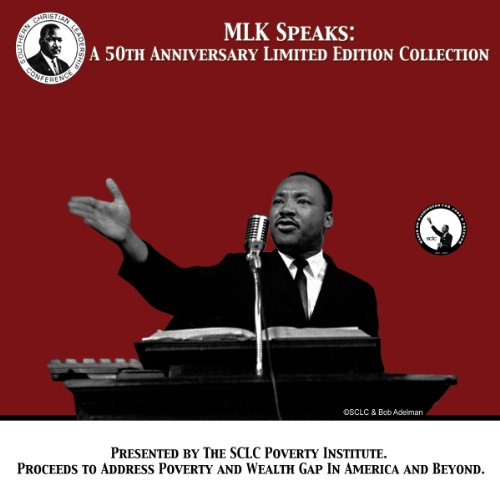 Dr. Martin Luther King, Jr. was the Co-Founding President of the Southern Christian Leadership Conference in 1957. Found in the archives at the SCLC were eight never before heard audio works of Dr. King in which he prophetically articulates his vision for a better America and world. These unique messages are the embodiment of his cause of justice, jobs and freedom. For the first time ever, these messages are being released to commemorate the 50th Anniversary of The March on Washington for Jobs and Freedom. The title of this message is "Entire Collection".

Martin Luther King, Jr. served as President and Ralph David Abernathy served as Program Director. It was one of history’s most dramatic and massive nonviolent protests, stunning the nation and the world. The boycott was also a signal to Black America to begin a new phase of the long struggle, a phase that came to be known as the modern civil rights movement. As bus boycotts spread across the South, leaders of the MIA and other protest groups met in Atlanta on January 10 – 11, 1957, to form a regional organization and coordinate protest activities across the South.

Despite a bombing of the home and church of Ralph David Abernathy during the Atlanta meeting, 60 persons from 10 states assembled and announced the founding of the Southern Leadership Conference on Transportation and Nonviolent Integration. They issued a document declaring that civil rights are essential to democracy, that segregation must end, and that all Black people should reject segregation absolutely and nonviolently.

At its first convention in Montgomery in August 1957, the Southern Leadership Conference adopted the current name, the Southern Christian Leadership Conference. Basic decisions made by the founders at these early meeting included the adoption of nonviolent mass action as the cornerstone of strategy, the affiliation of local community organizations with SCLC across the South, and a determination to make the SCLC movement open to all, regardless of race, religion, or background.

SCLC is a now a nationwide organization made up of chapters and affiliates with programs that affect the lives of all Americans: north, south, east and west. Its sphere of influence and interests has become international in scope because the human rights movement transcends national boundaries.