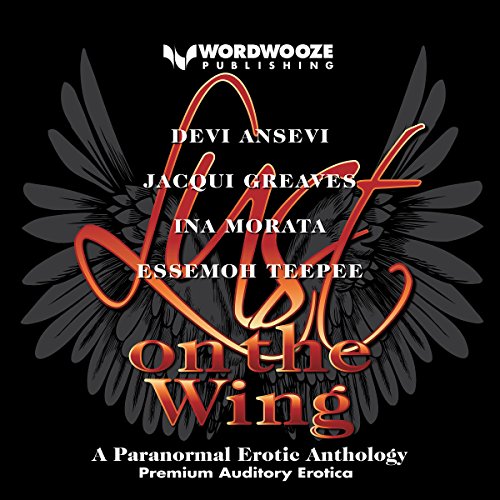 Lust on the Wing

If it weren't for bad luck with men, she'd have no luck at all. In Devi Ansevi's Captive Mate, reality will never be the same for graduate student Berry Randall. She's just learned that shifters are real, and they want her for their mate. Can she escape her captors? Or will she find freedom in the arms of the winged gryphons?

In Jacqui Greaves' Blood of Stone, Fredegund has guarded her petrified charges for a century. With the rising of the twin moons, the Grotesques are awakening, hungry for more than food. Meanwhile, the human hordes have created the Charm, a seductress destined to destroy the balance of power between Grotesques and humans. Can Fredegund prevent the coming disaster, or will her world be changed forever?

Lila seeks a man who can satisfy her darkest desires. Porphyro and the virginal Madeleine are preparing to elope. In Ina Morata's Flights of Fantasy, Lila sets her sights on entrapping Porphyro, and sets sexy enticements to dispose of Madeleine. When her plans go awry, Lila must use her Lilitu wiles to seduce them both.

In Essemoh Teepee's Leonora, Marked by Daemons, we meet a feisty young woman with a secret. The SHAKKAN are the Shepherds, and humanity is their flock. For millennia they have bred Mark Bearers like Leo to withstand the most extreme forms of pleasure and pain. But nothing ever stays the same, and this is a time of great change.