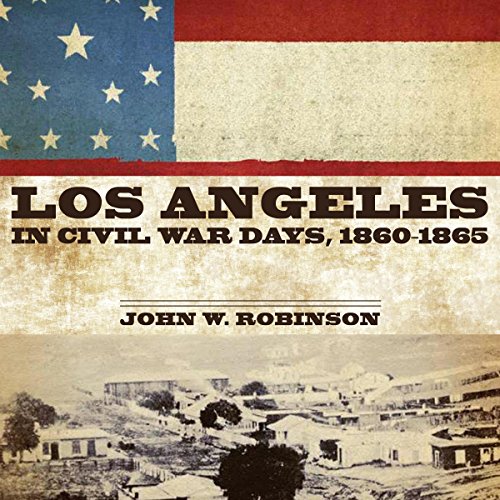 Most accounts of California’s role in the Civil War focus on the northern part of the state, San Francisco in particular. In Los Angeles in Civil War Days, John W. Robinson looks to the southern half and offers an enlightening sketch of Los Angeles and its people, politics, and economic trends from 1860 to 1865. Drawing on contemporary reports in the Los Angeles Star, Southern News, and other sources, Robinson shows how the war came to Los Angeles and narrates the struggle between the pro-Southern faction and the Unionists.

Los Angeles in the early 1860s was a developing town, lacking many of the refinements of civilization that San Francisco then enjoyed, and was much smaller than the bustling metropolis we know today. The audiobook focuses on the effects of the war on Los Angeles, but Robinson also considers social and economic problems to provide a broader view of the community and its place in the nation. The Conscription Act and devalued greenbacks incited public unrest, and the cattle-killing drought of 1862-64, a smallpox epidemic, and recurrent vigilantism challenged Angelenos as well.

California historians and those interested in the city’s historical record will find this audiobook a fascinating addition to the body of California’s Civil War history.

Published by University of Oklahoma Press.