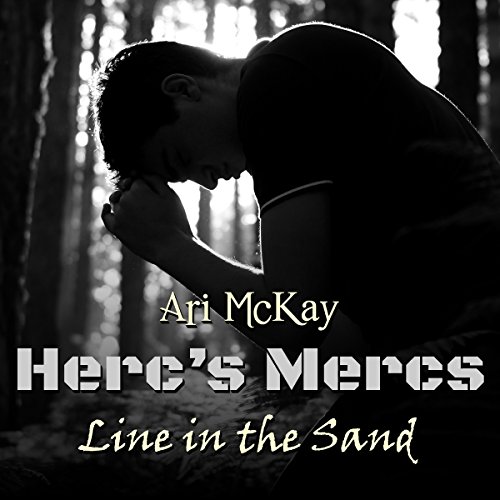 Line in the Sand

In order to keep his skill in the field up to date, Alec "Red" Davis, Hercules Security's chief of operations, takes a job protecting Jon Baldwin, an actor thrown into the spotlight by sudden fame. Although he's attracted to Jon, who is modest about his success and genuinely appreciative of his fans, Alec knows he has to keep his distance. Even when Jon makes it obvious he returns Alec's interest, there is a professional line Alec knows he must never cross - no matter how great the temptation.

While Alec accompanies Jon on a vacation to Central America, the two are caught in a devastating flash flood that pushes Alec's abilities to their limits. Determined to get Jon to safety, Alec has to battle both nature and his own feelings. But when Jon falls ill, Alec realizes that professional integrity won't mean a thing if he loses the man he loves.

Line in the Sand: Herc's Mercs by Ari McKay

The second book of Ms McKay's „Herc's Mercs“ series grabbed my imagination because of the interesting paring of Alec and Jon. Of course, the love story between an movie/theatre actor and his bodyguard is not new, but Ms McKay has written it with a close touch of reality and less sensationalism. The slowly building relationship between those two is sweet and nice to follow.

Mr.Schaumburg, the narrator of the audio book, does a good job presenting Jon with a warm, open and pleasant voice and Alec with a more calm,reserved and concerned one. He also has a good range of different voices for eg Alec's colleague or the overly excited squealing fans.

It would have been a relaxing and entertaining listening but the recording quality of the production is sadly anything but high standard. First I thought something was wrong with my player until I realized the bleeps and repetition of words/sentences as well as some rather long silent gaps came from the recording itself. I wonder if this out-take version instead of the cut-and-polished one came into publishing by accident; there certainly had been no mentioning anywhere. Some of those out-takes might be funny but on the whole they stem the flow of the story and hinder following it, minimizing my listening evening considerably.