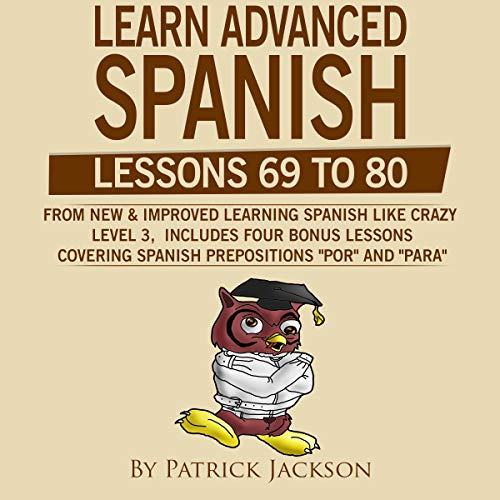 This program covers advanced-level Spanish and consists of lessons 69 to 80 from the "new" version of Learning Spanish like Crazy Level Three, as opposed to the "original" or "classic" version of Level Three. This advanced Spanish audiobook contains four bonus lessons covering Spanish prepositions por and para.

If you are not concerned with learning how to speak real, everyday conversational Spanish, then this Learning Advanced Spanish program is probably not for you. I understand there are people who only want to learn enough Spanish to communicate with a hotel clerk, restaurant waiter, flight attendant, etc., in a Spanish speaking country. But there are others who want to learn enough Spanish so they will be able to develop meaningful friendships and relationships with Spanish speakers and improve communication with Spanish-speaking in-laws. If the latter category best describes you, then this advanced-level Spanish program is for you.

The Learning Spanish like Crazy system also puts a major emphasis on improving pronunciation. Some people have a natural ability that allows them to quickly develop native-like pronunciation. You probably know someone who is the type of person to whom I am referring. We have all seen or heard someone who can imitate the voice of a famous politician, actor, singer, or other celebrity so well that you could almost be fooled into thinking you are actually hearing the famous person speak. Unfortunately, I was not born with that talent. I had to learn certain techniques to improve my Spanish pronunciation. Those same pronunciation-enhancing techniques are incorporated in this program.

So, if you’ve struggled to improve your Spanish pronunciation in the past, after completing this program, don’t be surprised if native Spanish speakers begin to compliment you on your pronunciation.