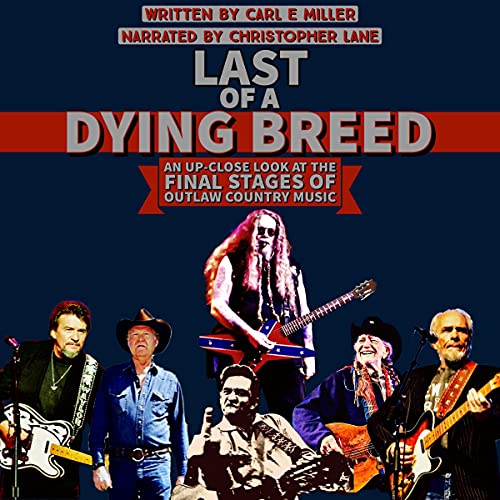 Last of a Dying Breed

This story is narrated by the award-winning Christopher Lane, who also narrated Rum Diary by Hunter S. Thompson. A few excerpts from this book have been previously published in the short story "Out of the Ordinary, in Ohio" and have since been completely reimagined entirely and expanded greatly.

This story is loosely based on actual events and has been updated with several brand new characters that are far more relatable. This book was written with a completely new and unique plot, along with much further in-depth coverage on the outlaw musicians for a much better listening experience.

Winston, a music journalist from Tennessee, is given an assignment to travel to Ohio in order to cover the live music scene and visit the Rock and Roll Hall of Fame, where the famous Johnny Cash tour bus has remained parked for several years. He sets his sights on proving once and for all that the new music scene is still alive and well, but this, however, was no easy task. Initially, he struggles to find a concert that's worth attending, until he stumbles on a live rock show from one of the early pioneers. While attending the event he becomes entangled with some very strange and unpredictable characters. Winston then finds himself diving very deep into the Cleveland underground scene, coming up with more material than he could have ever imagined by covering the live concerts.

After spending way more time than initially planned in Cleveland, Winston finally catches a break. He hears a fast-paced advertisement on the radio announcing that David Allan Coe would be performing at a local venue the following week. Winston thought that covering the show would make for a great story, so he pitched the magazine company an idea that he would set out to cover the final stages of outlaw country music. The magazine enjoyed the pitch so much that they gave him the green light, along with a $1,000 advance, and Winston finds himself attending a concert to see one of the very last original outlaws.