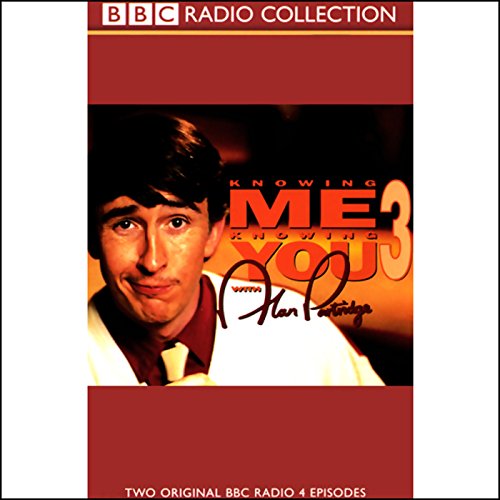 Knowing Me, Knowing You with Alan Partridge

Steve Coogan is Alan Patridge, the chat show host from hell, in two episodes from his original BBC Radio 4 series.

In the first of two cringe-inducing episodes, Alan meets 'Britain's greatest living novelist', Lawrence Camley, and tackles him on the subject of not winning the Nobel prize for Literature. Feminist therapist Ali Tennant demonstrates her work on Alan, with surprising results, whilst a vile slur is cast upon Adam Wells, 'Carnaby Street's Mr Boutique', when he attempts to promote his new fizzy drink Vegina.

The second episode finds Alan augmented by an American supermodel co-host as they broadcast live from Las Vegas. Their guests include Hollywood star couple Sally Hoff and Conrad Knight, who persuade Alan to join them in a Las Vegas Medley. Next on the bill is New York Jewish comedian Bernie Rosen, who doesn't quite deliver the goods as far as Alan is concerned, and finally the host with the most challenges professional gambler Jack 'the Black Cat' Colson in a game of roulette at a great personal cost.

Joining Steve Coogan as he squirms his way across the easy chairs are Rebecca Front, Doon MacKichan, Patrick Marber, and David Schneider.