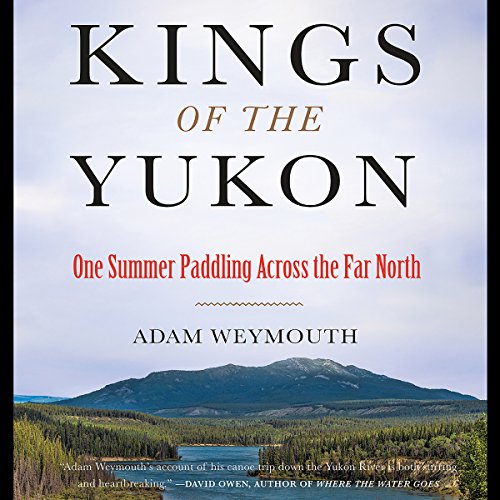 Kings of the Yukon

"Stirring and heartbreaking." (David Owen, author of Where the Water Goes)

The Yukon river is 2,000 miles long, the longest stretch of free-flowing river in the United States. In this riveting examination of one of the last wild places on earth, Adam Weymouth canoes along the river's length, from Canada's Yukon Territory, through Alaska, to the Bering Sea. The result is a book that shows how even the most remote wilderness is affected by the same forces reshaping the rest of the planet.

Every summer, hundreds of thousands of king salmon migrate the distance of the Yukon to their spawning grounds, where they breed and die, in what is the longest salmon run in the world. For the communities that live along the river, salmon was once the lifeblood of the economy and local culture. But climate change and a globalized economy have fundamentally altered the balance between man and nature; the health and numbers of king salmon are in question, as is the fate of the communities that depend on them.

Traveling along the Yukon as the salmon migrate, a four-month journey through untrammeled landscape, Adam Weymouth traces the fundamental interconnectedness of people and fish through searing and unforgettable portraits of the individuals he encounters. He offers a powerful, nuanced glimpse into indigenous cultures and into our ever-complicated relationship with the natural world. Weaving in the rich history of salmon across time as well as the science behind their mysterious life cycle, Kings of the Yukon is extraordinary adventure and nature writing at its most urgent and poetic.

"Adam Weymouth writes of the Yukon River, the salmon and the people, with language that flows and ripples like the water he describes. There may be a smoothness to the words, but pay attention, there are deep undercurrents here. You can hear the water dripping from his paddle between each stroke as he travels that river. It mingles with the voices of the many people he visits along its shores." [Harold Johnson, author of Firewater: How Alcohol Is Killing My People (and Yours)]

"This is the best kind of travel writing. Weymouth embarks on an ambitious journey - 2,000 miles down the Yukon in a canoe-voyaging, listening, and learning. An outstanding book." (Rob Penn, author of The Man Who Made Things Out of Trees)

"The writing is lyrical, whether describing a gull in the wind, the difference between nomadism and restlessness, the symbiosis of people and fish, or the slow amble of Prudhoe Bay's oil down the Trans-Alaska Pipeline. Equal parts natural history, travelog, and cultural history, this work will appeal to readers of all three genres, especially fans of John McPhee." (Margaret Atwater-Singer, Library Journal)

"In this timely story 'of relationships, of the symbiosis of people and fish, of the imprint that one leaves on the other,' Weymouth keeps the pages turning to the very end." (Kirkus)