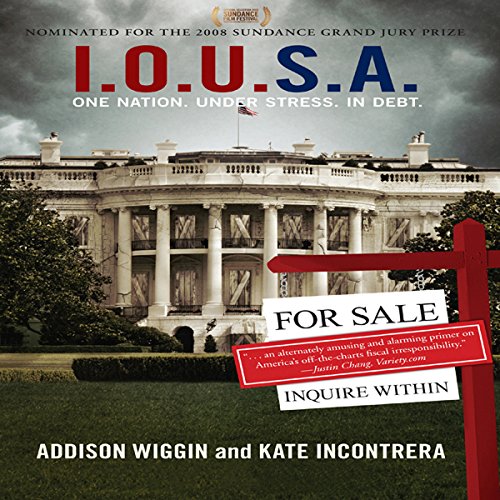 The United States has been spending its way deeper and deeper into the red, and saddling future generations with the mess - but who's paying attention?

To answer that question, this companion audiobook to the critically acclaimed documentary I.O.U.S.A. includes some of the most revered voices in the nation, including Warren Buffett; former treasury secretaries Paul O'Neill and Robert Rubin; Pete Peterson, CEO of The Blackstone Group; Congressman Ron Paul (R-Texas); and best-selling Empire of Debt author Bill Bonner.

Armed with these interviews, historical references, and damning statistics, this audiobook takes a lively and entertaining romp through the four deficits the nation faces: the budget deficit, the personal savings deficit, the trade deficit - and what former U.S. Comptroller General David Walker, who resigned abruptly in 2008 over Congress's lack of action, calls the "leadership deficit" in Washington.

Defiantly non-partisan, the empowering solutions outlined in this audio are a must-listen for any American who wants to help change "business as usual" in Washington as a new administration heads towards the Oval Office. "We the People" can get our politicians to stop spending, promote responsible economic programs, and hand our children and grandchildren the secure future they deserve.

"Early reviewers have dubbed I.O.U.S.A. an Inconvenient Truth for the economy." (The Washington Post)
"The next president better take this seriously, or I fear that we'll be in a much worse situation than a recession." (David Walker, former Comptroller General of the United States)

The story ist simple but nevertheless interesting, even more in today's context: The USA have been piling up debt in form of government debt but also private consumer debt and some people are worried about that current state.The audiobook consists of two parts: The first one explains the four deficits the US is facing today (budget, savings, trade and leadership) while explaining technical terms so even readers / listeners with no economics backround can follow. It's very intersting and explains a lot about the current situation.The second part constists of many interviews with leading economists, politicians and business people who give their personal opinion about these deficits. This is particularly intersting and I highly recommend it as these people have different viewpoints and throw different lights on the problem.