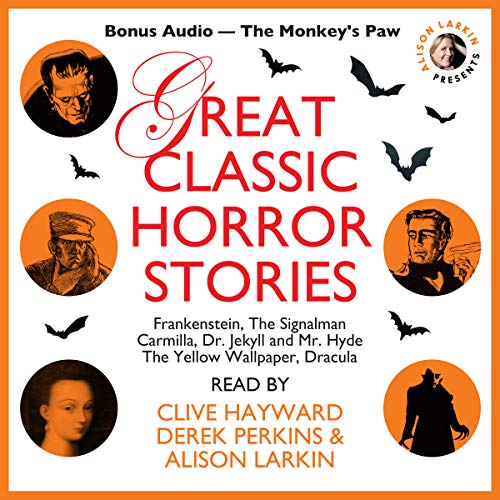 More than 30 hours of great classic horror is brought to haunting new life by three A-list narrators whose performances are nothing short of electrifying.

“At once terrifying and heartbreaking,” raves AudioFile Magazine about Clive Hayward’s Earphones award-winning reading of Frankenstein that starts the collection.

“Both narrators are outstanding,” says AudioFile about Audie Award-winner Derek Perkins and Earphones Award-winner Alison Larkin’s narration of The Strange Case of Dr Jekyll and Mr Hyde and "The Yellow Wallpaper".

Frankenstein was born when Mary Shelley entered a competition with poets Lord Byron and Percy Shelley to see who could write the best horror story. Read by Clive Hayward.

The Signalman, a ghost story by Charles Dickens, was influenced by a fatal train accident he survived, though he was forever haunted by the event. Read by Derek Perkins.

Carmilla is Le Fanu’s tortured, powerful female vampire who set the stage for so many vampires to come, including Dracula. Read by Alison Larkin.

The Strange Case of Dr. Jekyll and Mr. Hyde grew out of a horrifying nightmare Robert Louis Stevenson had one night in Bournemouth, England, in 1886. Read by Derek Perkins.

"The Yellow Wallpaper" sprang from a catastrophic nervous breakdown Charlotte Perkins Gilman had following the birth of her daughter. Read by Alison Larkin.

Dracula, by Bram Stoker, is the quintessential vampire horror story that set out many of the conventions modern fantasy writers still embrace. Read by Clive Hayward.

"The Monkey’s Paw", by W W Jacobs, is a supernatural short story. Read by Clive Hayward.