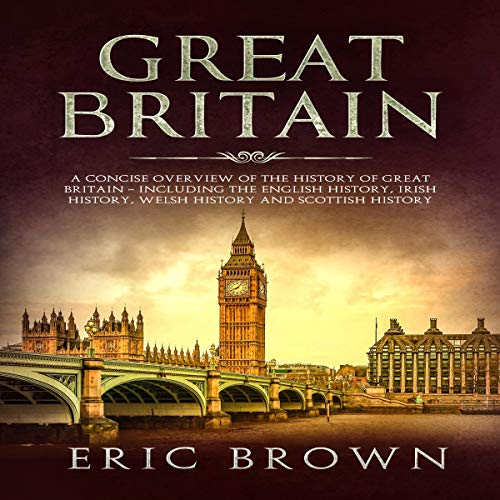 Explore the history of Great Britain from start to end. 4 Manuscripts in 1.

England is a fascinating and intriguing country. From its pre Christian roots, through Roman occupation, Viking invaders, the Norman Conquest and the building of the largest empire the world has known, this small country has punched well above its weight on the world stage.

Now, in this absorbing audiobook you can learn:

In this audiobook you can find out:

The Ireland of today has been shaped by the past and its history has provided some of the major flashpoints in the wider scope of the British Isles and Europe....

From different warring factions and distinct identities ruled by individual monarchs, Wales eventually formed into a single nation. But this is only a small part of its story.

With sections that cover:

Scotland has always held a fascination for people around the world. From inventors and patriots to great writers and thinkers, Scotland has traditionally punched well above its weight on the world stage. But did you know how it all started and how Scotland has been shaped by wider world events?

This in-depth and informative audiobook aims to give the listener a taste of what Scottish history has meant for it, the United Kingdom as a whole and for the rest of the world as a result. It is perfect for anyone who has an urge to learn more about what Scotland has done throughout the years!

Don’t wait another moment to enjoy from this information. Get the audiobook Great Britain right away!