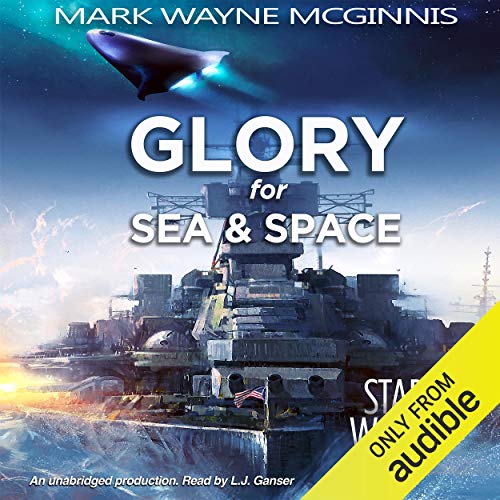 Glory for Sea and Space

An advanced enemy fleet, comprised of thousands of Sahhrain Vastma-class warships, is headed toward the Sol System - a fleet that can in no way be matched by the US fleet's current assets. Omni Jason Reynolds, head of the entire Allied force defense, also learns his daughters, Boomer and Mollie, have ventured into the multiverse to deal with the murderous Rom Dasticon once and for all. He soon discovers it was a one-way trip - marooned, the girls have no way to return home - unless he can somehow find them one.

To discover key answers about the Caldurians and their multiverse technology, Jason and Dira return to the scrapyard where his father, Admiral Perry Reynolds, now semi-retired, resides. Here, long-held secrets of the past are unearthed - the real story of the discovery of The Lilly and Ricket, once trapped hundreds of feet below ground. But, as they will learn, the story began many years before that, when young Captain Perry Reynolds was commissioned to skipper a secret 1940s-era Iowa-class battleship, the USS Montana. His days spent on that great warship - as well as his subsequent defeat and dishonor - mold the man Perry Reynolds ultimately becomes.

As ramifications from past events converge into the present, Jason will be faced with three prominent Star Watch crewmembers meeting their untimely, and emotionally devastating, end.