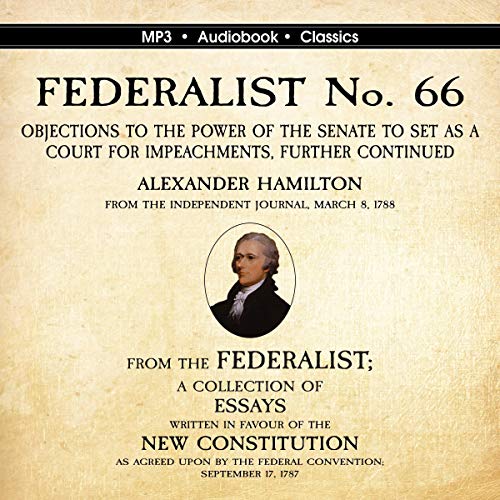 FEDERALIST No. 66. Objections to the Power of the Senate to Set as a Court for Impeachments Further Considered

The Federalist Papers is a series of 85 articles arguing in favor of ratification of the United States Constitution by the 13 original colonies. When the Constitutional Convention met in 1787 to revise the Articles of Confederation, James Madison and Alexander Hamilton advocated instead for the creation of a new government. The delegates used the principles contained in Madison’s Virginia Plan to create the Constitution, which was submitted to the states in September 1787. The Federalist papers were written in response to criticism of the Constitution.

"Federalist No. 66" is a continuation of the argument in "Federalist No. 65" for the Senate as the trial venue for impeachments. In No. 66 he addresses specific anti-Federalist objections in a series of four rebuttals. The issues addressed are: first, the concern that the Senate is encroaching on the powers of the courts; second, that the Senate itself may become too aristocratic; third, that impartiality may suffer when trying appointed officials previously approved by the same body; and, fourth, that the Senators may be unable to judge their own actions impartially in ratifying treaties.

Das sagen andere Hörer zu FEDERALIST No. 66. Objections to the Power of the Senate to Set as a Court for Impeachments Further Considered