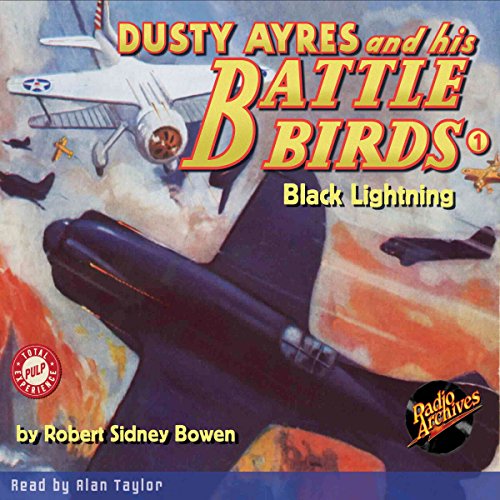 Dusty Ayres and His Battle Birds #1

Dusty Ayres and His Battle Birds #1

One of the most daring series ever to emerge from Harry Steeger's Popular Publications was when he converted Battle Birds magazine to Dusty Ayres and His Battle Birds back in 1934. Not content to tell tales of World War I, the new title focused on forecasting the next war!

Set in an indeterminate future, the new series was out-and-out-science fiction built around the popular aviation genre. Flying the futuristic Silver Flash aircraft, backed up by wingmen Curly Brooks and Biff Bolton, Captain Dusty Ayres strove every month to beat back the forces of the modern Genghis Khan called Fire-Eyes, who had conquered all but North America.

In this, the first series outing, the assault on America commences. With Europe in the grasping hands of the Black Invaders and the US Naval Fleets split by the destruction of the Panama Canal, the future looks bleak for the nation. But the Black Dart warplanes of the enemy were about to strike a wall of screaming steel - Air Group #7, commanded by Dusty Ayres!

The wonderful thing about Dusty Ayres and his Battle Birds is that when Popular decided to end the series, Bowen penned a concluding chapter, trying up all loose ends, and bringing the glorious conflict to a satisfying conclusion.

Black Lightning is read with dazzling urgency by Alan Taylor. This audiobook also features two additional Robert Sidney Bowen stories of the war against the forces of Fire-Eyes, "The C.O.'s Coffin" and "The Smoke-Screen Ace," read by Milton Bagby.