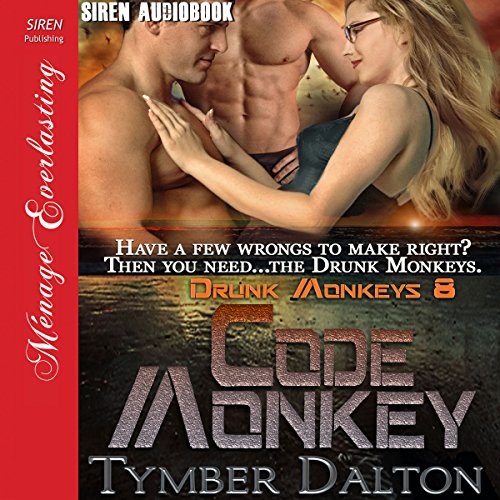 Have a few wrongs to make right? Then you need...the Drunk Monkeys.

Shasta Myers has had to be the strong one in her family. As a county traffic signal computer programmer, she doesn't make a lot, but she refuses to compromise her morals for a quick buck as a black-hat hacker.

Then her world implodes.

Juju, Delta, and some of the Drunk Monkeys are in Houston to shut down another of Silo's Kite labs. So when they barely stop the adorably unprepared Shasta from stumbling into a potentially deadly situation, it's not difficult for the two men to fall hard and fast for her.

Now, the situation's deteriorating all over the world, and Silo's ratcheting up the pressure. They'll need someone of Shasta's skills to stay a step ahead of the apocalyptically determined minister. Will Shasta's feelings for Juju and Delta be enough to convince her to join their battle to save the world and what's left of her family?

The books in this series are best listen to in order: