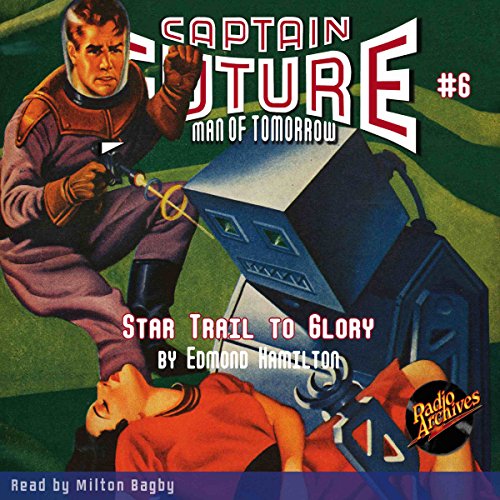 Follow the Futuremen along a multi-million miles of stellar speedway as they streak around the system in their greatest race for justice!

Mort Weisinger, Thrilling Publications' go-to science fiction editor, presented author Edmond Hamilton with a concept for a futuristic hero cast in the mold of Doc Savage. This was a calculated move, as Hamilton had already built a strong reputation as a popular writer of space opera. Hamilton took the rudimentary odds and ends that Weisinger had come up with and stitched them together into Captain Future, using another series he'd written, The Three Planeteers, as a blueprint.

Protecting the universe is not a job that Captain Future and the Futuremen can do alone. The Planet Police, a far reaching organization of law enforcement officers patrolling the solar system, work with Curtis Newton in many of his adventures. Marshal Ezra Gurney is a 40-year veteran of the Planet Police, able to remember when law was not widespread. Joan Randall is also a member of the organization, an officer in the elite Space Patrol.

As Captain Future stories continued to be written, it likely became necessary for Newton and the Futuremen to make their way beyond our own solar system, even our own galaxy. To this end, Captain Future eventually invents the "vibration drive", a device that essentially allows the band of heroes to go anywhere they need to to protect the universe. New planets get explored and galaxies unheard of spring into life, all teeming with some mystery and evil for Captain Future to face. With each Captain Future story, the boundaries of where the hero might go grew, eventually only being limited by the readers' imaginations.

Rocket into science fiction adventure and discover new worlds. Ripped from the pages of the Spring 1941 issue of Captain Future magazine, "Star Trail to Glory" is read with wonder and excitement by Milton Bagby.