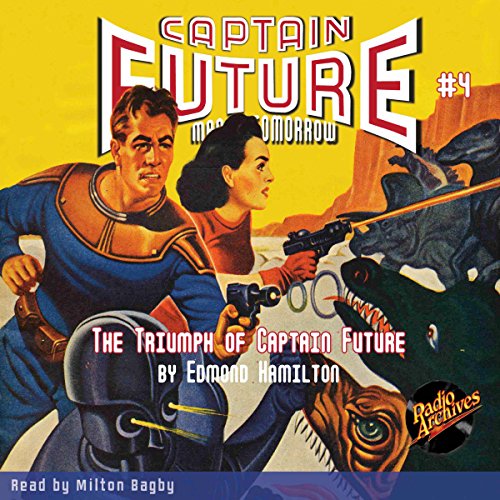 Racing to the ringed planet in answer to Earth's clarion call, the Wizard of Science seeks a forbidden elixir of life - and finds the city of eternal youth!

The Captain Future stories were not only populated with magnificent characters, but they were also set in a wild, imaginative, almost psychedelic universe. Edmond Hamilton built worlds and star systems that in many ways completely disregarded what the public knew to be true about outer space, but they did not care. Nearly every planet in our solar system could support life, and danger lurked there, too. Although the original stories took place amongst familiar planets, Hamilton would take fans far beyond anything familiar in later tales.

Published from 1940 to 1951, Captain Future stories initially take place in the far flung year of 1990. As the series progressed, Hamilton moved away from pinning the ongoing adventures to a particular time and focusing more on forming continuity, where stories built on one another. This allowed for a freedom of imagination, for Hamilton to tell stories without restrictions.

Although Captain Future was initially modeled on Doc Savage, hints and influences of other heroes make their way into the stories as well. For instance, the Planet Police summon Captain Future with a signal flare fired into the sky, similarly to Batman, the Phantom Detective, and others. Also, Captain Future has a female interest, although he never fully admits that she might be a romantic one. A member of the Space Patrol, Joan Randall proves in story after story that she can stand alongside the Futuremen. She also clearly has affection for Curt Newton, waiting for him to acknowledge his feelings for her that as so many Pulp heroines do.