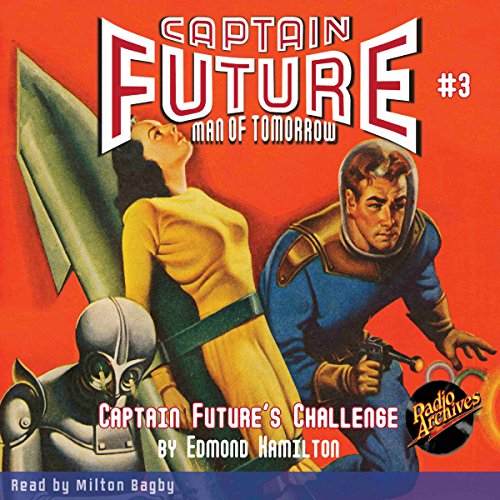 Striking terror on four worlds, a mysterious raider throttles interplanetary commerce - and earth summons Curtis Newton, the wizard of science, and his trio of Futuremen to combat this sinister menace.

Science fiction is full of heroes, from warriors to explorers. Only one figure, though, exemplifies every trait that a great hero sailing the stars should have. Captain Future, created largely by Edmond Hamilton based on a concept given to him from Thrilling Publications. Equal parts genius, fighter, scientist, explorer, and loyal team member, Captain Future set the standard for what great science-fiction stories should be, the impact of the stories still being felt today.

Mystery is an element of many of the Captain Future stories. Curt Newton and the Futuremen are often faced with not only saving an alien race or preventing planetary destruction, but also learning who is behind the latest evil deed or how it is being done. The way in which the science fiction whodunits are built in the stories aren't simply throwaway devices. Clues are left and facts are shared with listeners, making the final solution believable and exciting, letting them reveal the bad guy right alongside Captain Future.

Most definitely science-fiction space opera, the Captain Future stories go beyond that. A traditional pulp hero in many ways, Captain Future also proved to be a character that readers could easily relate to. His involvement in the quest for justice is equally driven by his natural curiosity, the desire to explore and learn. He also clearly sees those closest to him, particularly the Futuremen, as family, and reacts to them in that way. The stories are also peppered with humor and absurd encounters with strange beings.

Rocket into science fiction adventure and discover new worlds. Ripped from the pages of the summer 1940 issue of Captain Future magazine, "Captain Future's Challenge" is read with wonder and excitement by Milton Bagby.