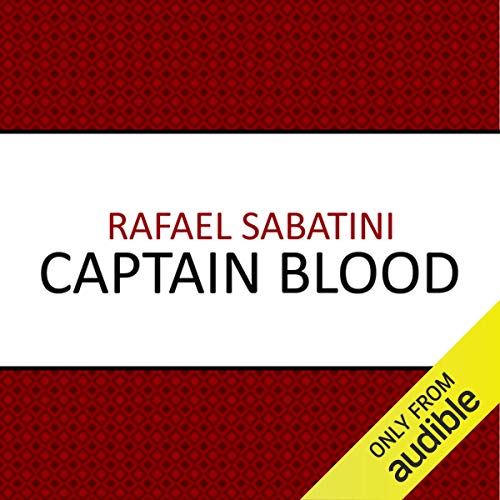 Wrongfully arrested following the Monmouth rebellion of 1685, Peter Blood, country physician and former soldier, escapes the hangman's noose only to be exiled to the tropical colonies. Sold into slavery to a cruel plantation owner, his moral fortitude and medical ability soon earn him the favour of the island's governor and the attentions of Arabella, his master's niece. When the town is attacked by marauding Spanish buccaneers, Blood springs to the rescue, and with a motley yet loyal band of shipmate’s escapes to begin a life of noble piracy and adventure on the Caribbean seas.

A classic swashbuckling tale of piracy, romance and redemption, Captain Blood stands as one the greatest adventure novels of the 20th century. Author, Rafael Sabatini (29 April 1875 – 13 February 1950) was an Italian/English author of romance and adventure novels. He was a prolific writer and produced a new book almost every year, maintaining a great deal of popularity throughout his career, but the titles that secured his reputation were Scaramouche and the Captain Blood novels. He died on 13 February 1950 in Switzerland.

"One wonders if there is another storyteller so adroit at filling his pages with intrigue and counter-intrigue, with danger threaded with romance, with a background of lavish colour, of silks and velvets, of swords and jewels" ( Daily Telegraph)
"Sabatini's stories abound with drama and melodrama, action and excitement and brilliant colour, as well as minute period detail. No writer, not Scott, nor Dumas, nor Stevenson, has brought the past to life more vividly or accurately" (George Macdonald Fraser)
"Mr. Sabatini is both a wonderfully fertile creator of exciting fiction and a stylist of distinction." ( Punch)