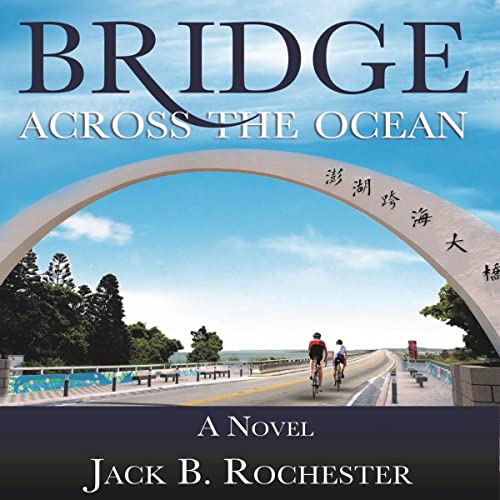 Bridge Across the Ocean

Bridge Across the Ocean, set in 2011-12, is the story of four New England entrepreneurs in their mid-30s who founded Smithworks, a high-end custom bicycle maker, a decade earlier. Jedediah Smith, Shieh-Seng "Luke" Lin, David Bondsman and Rick Saundersson have invented the most innovative bicycle drive in history, the Spinner, a technologically advanced device that produces and stores its own energy without batteries. A week before they are to leave for Taipei, Taiwan, to discuss a licensing agreement with Joyful Bike, the world's largest bicycle maker, Luke is killed by a hit-and-run driver. The remaining three persevere, but at Tokyo's Narita International Airport are set upon by two Japanese agents of business espionage who don't know what they have, but nevertheless are interested in stealing it to sell to the highest bidder. These "information worms" pursue the cyclists to Taipei; a game of espionage-counterespionage ensues.

They are met by Jung-Shan Zheng, Joyful's director of business development, at Taoyuan International Airport. The next day they meet Joyful's president and CEO, Ming-Chang Zheng who, it turns out, is Jung-Shan's father. His gift to them: Joyful's most sophisticated, expensive carbon-fiber bikes. Jung-Shan takes them on exhilarating rides along the rivers of New Taipei City and into the mountains. The three Americans often find themselves experiencing culture shock, both social and business, while trying to thwart the kung fu-like attacks and intrusions by the Japanese information worms. Jung-Shan guides them through these changes with help from her father, Joyful’s Australian security chief Derek Hurst, and Suzie Sun, Luke's former fiancée. The Americans are eager to make a deal, but Jung-Shan tells them, “Business done quickly is business done badly.” The threat vector from the information worms grows, but so does a love affair between Jung-Shan and Jed, although they encounter cultural roadblocks of their own.