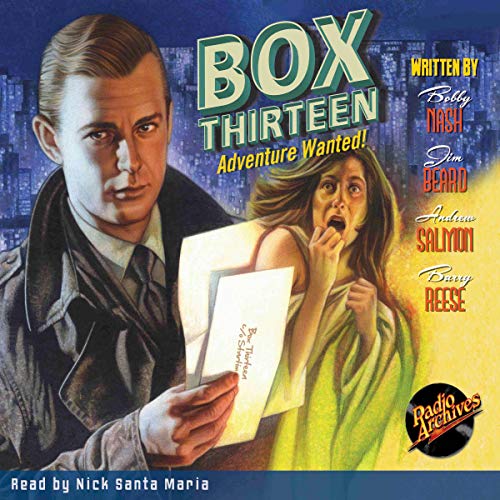 When Dan Holiday opens box thirteen, he never knows what adventure awaits him. A former newspaperman turned novelist, Holiday crafts the plots for his books by living them. Spurred into action by letters from his readers, Dan Holiday's adventures range from the outrageous to the dangerous. Whatever the case, Dan Holiday is sure to find adventure.

Based on the 1948-49 radio drama starring Alan Ladd, this collection includes six all-new Box Thirteen tales that carry on the action-packed tradition of the originals.

"The Mystery of the Menacing Manuscript" by Bobby Nash. A surprise invitation sends Dan Holiday on a mystery writer's weekend retreat filled with treachery, deceit, and murder.

"The Horror of the Plague Doctor" by Barry Reese. A worried investor's letter puts Dan Holiday in the crosshairs of a death doctor's nefarious plot.

"The Out of This World Affair" by Bobby Nash. A cryptic message sends Dan Holiday scurrying to find the truth about Citizen X's extraterrestrial discovery before men in black suits catch them both.

"Room 13" by Jim Beard. A request for aid puts Dan Holiday on a collision course with mobsters, a mechanical man, and a scientist who wants to harness the author's brainwaves.

"The Game's Afoot, Mr. Holiday" by Bobby Nash. A killer gives Dan Holiday a chance to stop him before he murders his next victim. Can he decipher the killer's clues in time?

Lastly, in "Kaleidoscope" by Andrew Salmon, a frantic letter from a troubled wife sends Dan Holiday straight into a murder investigation where he's the chief suspect.